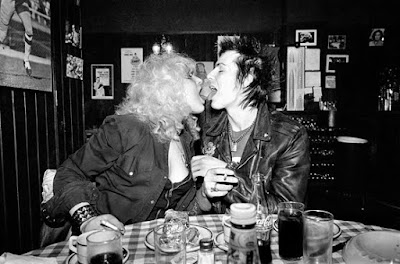 Night before last, I dreamt that my puppy died and I was sad all day. I don't even have a puppy, but dreaming about it was enough to hurt my feelings. What I do have is a 9 month old cat, and she's a punk.
She's selfish, destructive, and has no regard for my authority. I think she's been smoking in the bathroom. Last night she tore through the living room, kicking the legs of the furniture, and stopped in the hallway to turn to me and say, "What are you looking at?"

Then she tore down the driveway and stayed out past curfew. I think she was out racing for pinks.

"She's probably acting out because she's bored," I thought.

So I bought her a new toy--an expensive, stupendous, pink- and purple-feathered, sashaying, bird-in-Las-Vegas-drag toy. This toy was absolutely flaming. If this toy had a theme song, it would be "I will survive."

The toy, sadly, did not.

My punk cat loved that toy. She batted it out of my hand and had it in her jaws before it hit the floor. She rolled on it. She batted at it with her back feet. She sang romantic songs to it. Then she plucked it naked and left it--dead and forgotten--in the middle of the kitchen floor. Punk love is ferocious, vicious, and violent; punk love will leave you with nothing but pink and purple feathers and bits of neck and wing that stink of catnip.

Pajama dress code or not, I can't visit with you at your lush family vacation home with you and the punk. I'm afraid Darcy might impersonate a cat toy (maybe not that particular toy, but still) and it would all be over but the crying. Sixty pounds of laid-back could never compete.

You just crack me up. I am glad you are posting more frequently. I could use a daily dose of you.