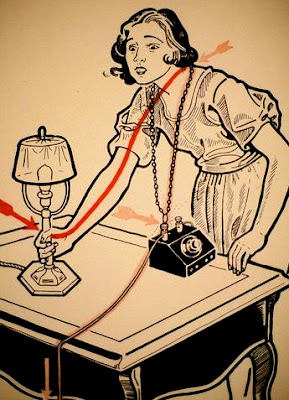 For years, Tawana and I have had an in-case-of-sudden-death arrangement. I won't go into details, except to say that each of us has agreed to go in and vamoose certain items that might not leave our loved ones with the best last impression. We're good friends, and that's what good friends do.
This is the kind of thing that has to be revisited periodically--stuff gets moved around, the list of damning items changes. I assume that--given enough time--there will eventually come a moment when we no longer need this compact. If you get to live long enough, you reach a point where you just don't care what people think of you after you've called it a day.

Last week, Tawana told me that she is almost always conscious of what she's doing at any given moment--just in case it happens to be her last. In other words, would she want to be found having gone the way of all flesh while doing whatever it is she happens to be doing? As she was telling me this, I had another one of those moments when I realized how fortunate I was to have a very best friend. Who else is going to go the extra mile to be sure my anxiety level about an already uncomfortable subject is ratcheted up there where it's supposed to be?

Because, before she named it, I hadn't even considered this.

When I have thoughts of death, they are almost always of the how-to-avoid-the-untimely variety. Premature death lies in wait around every corner for the woman who lives alone. I wish I could see the statistics for the number of women who plummeted to their deaths carrying three trips-worth of crap upstairs--just so they wouldn't have to schlep back down and then up again. And again. I'd like to know my odds of meeting my maker at the hands of my 5-bladed uber razor, or via the 3am hormonally-induced heatstroke that's out there with my name on it. It's highly likely that I'll fall and break something I need to maintain adequate ventilation and respiration while trying to beat my cat to the ringing telephone. I might choke to death on a piece of poorly masticated corndog, or strangle on my own spit while trying to get AT&T on the line.

ADT and Brinks may be worried about scary home invader types, but I'm convinced any home security system is just going to lock me in with the thing that's trying to kill me. The CSI team is going to take one look at me--lying there in a pool of Netflix envelopes--and then turn their tiny little flashlights to the room around me.

"Well," one of them will say,"I'm surprised she's lasted this long. It's a danger zone in here."

Then another one--probably the pretty one in white designer jeans, will say, "Hey, Mac/Gil/Horatio. Lookit this. Would you say these are two-day old pajamas, or three?"

When you get as old as your Mom, you get rid of all that damning stuff so you don't have to worry about your children finding it and saying "Ohuuu, I really didn't need to know that about the old gal".

I'm gonna guess that there are no untrod trails. The travelers after you will have similar interests, attire, gear; whatever. Variations will only be superficial. Oh, and any history isn't likely to make it much beyond the succeeding generation - well, except for the really colorful tales. But, they usually involve acts and events.