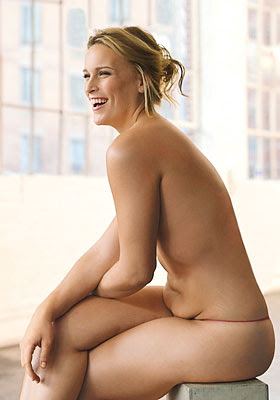 Did you see this picture last week? A lot of you did--it made a fairly big splash for a photo measuring 3 inches square.
"The Woman on page 194" of Glamour is 20-year-old, plus-sized model Lizzie Miller. She's not plus-sized at all, when using real-girl calculations. In fact, Lizzie's picture looks unremarkably normal. It's a variation of what most of us see when we look in the mirror, and not at all what we've become used to seeing in the magazines. This is the kind of shot we wouldn't expect to see without a black bar thrown over her eyes.

And although Glamour editor-in-chief Cindi Leive says her "inbox was flooded" with positive messages and that she "pays attention to this stuff," I wouldn't hold my breath, if I were you.

This isn't a look you can expect to see on the cover any time in the near future.

At practically the same time Lizzie Miller's picture was prompting an outpouring of affirmative responses, Self magazine's editor-in-chief Lucy Danziger was adamantly defending the photoshopping of singer Kelly Clarkson's cover shot. While striving to "capture the essence of [Clarkson] at [her] best," they shaved a goodly portion off the singer--presumably because her best just couldn't possibly be that heavy.

This much is true: virtually every styled photograph that sees publication has been photoshopped. (Have you ever seen an electrical switchplate in a room shot?) With the right software, even the perfect shot can be made more so. The same holds true for the perfect woman.

I've been in these meetings--the ones where the editor-in-chief looks at the photography director and demands to know why the 99-pound model looks so fat or so ugly. I was always thankful the models weren't privy to what was being said about them behind closed doors--usually by women nearer the exit door of the feminine ideal than the entrance.

It wasn't until I took my place at that conference table that I understood that the flawless standard being fed to us by "the media," could more accurately be described as the absolute as defined by the one or two people at the top of the publication's org chart. Make no mistake--the photostylists, photographers, artists, and writers all take instruction from the executive director and editor-in-chief. If those people wanted realistic representations on the pages of their publications, that's exactly what you would be getting.

And it wouldn't take an outpouring of positive responses from readers to make it happen.

One of the most beautiful things about this photo is that it's a celebration of femininity-- this woman looks comfortable and even joyful in her skin, and she makes the viewer feel that way too. Which is pretty much the exact opposite of what most magazine photos do, depicting hunched-over (or jumping in front of gray curtains), emaciated models doing their best bitchface, making us feel bad about ourselves so we'll buy all the stuff they're selling. And there's the rub, isn't there, that they think they have to make us feel bad about ourselves in order to convince us to buy not only the magazine, but everything the magazine is selling.

Because contrary to those Dove ads, a woman like the above, who loves her belly and thighs, like for real for real? That woman probably isn't interested in buying the firming cream.