In which I try to get absolution for asshatery by means of public confession. 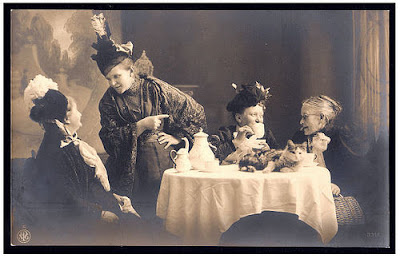 I planned all day yesterday to go to a Writers' Group meeting last night. I'd printed out my Google directions and the host's phone number, in case I got lost. I read and made notes on all the stuff we were going to be working on. Although I worked on class prep all day in my pajamas (nothing new there), I set the alarm so I would know when to knock off to take a shower, put on my last remaining pair of publicly-acceptable pants and unknot my tangledy hair.

I'd been late for the last meeting, so I wanted to get there on time. Then too, when the meeting is at someone's house, you kinda want to be there when they expect you. I was just headed out the door when I got a call from some friends who live too far away for me to see as much as I would like.

"We're just getting off the interstate right now, headed to your house. Come go eat with us."

"No. They think I'm coming. And there'll be Iranian food. Stuffed grape leaves!"

So I caved. I called the meeting host and made a feeble apology.

"Look, I'm really sorry, I know I don't come to meetings very often, but I usually try and let everyone know ahead of time. It's just--I only just now found out that these people are coming."

She was very gracious, considering the meeting was scheduled to start within the next fifteen minutes. I stand people up all the time; I'm nothing if not consistent. But these folks don't really know me very well. They don't know that I'm undependable. And this woman is a real grown up--she cooked food and everything. She shows up to stuff.

"I feel really bad," I said, especially after you went to all that trouble to make Iranian food and stuff grape leaves and junk."

"Oh! Well, we decided to have pulled BBQ pork instead."

"Pulled pork?" I thought. "Ooooh. I'm not really a big a fan of BBQ pork. I don't feel so bad about missing pulled pork."

And that's when I realized that I had actually said that last part out loud.

So. Probably not in the Writers' Group anymore.

image, foxtongue's flickr photostream. (Note: our hats are not this fancy.)

I laughed out loud and startled my dog. Glad to know I'm not the only one who sometimes accidentally says embarrassing things out loud. A friend recently told me she admires my courage for stating my opinions and standing up for myself. I was like, ohhhh noooooo honey. I inherited from my father a congenital inability NOT to say what's on my mind, often to my detriment.

God, I hope someone showed last night. Did everyone cancel?

I did, but I have a better excuse. Don't worry, I'll absolve you.

This one did give me a hearty laugh :)

I think things out loud too. Typically, I don't feel bad about it, either.