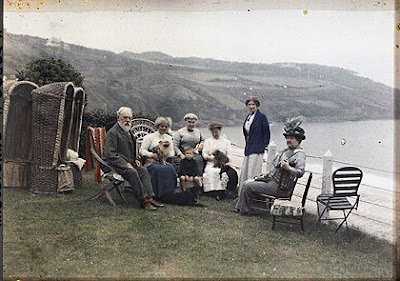 I've decided to spend the rest of the month at the deluxe family condo getaway. My mother was here all of July, and my brother and Super Tara were here a couple weeks ago. I was still working then, but I did have the opportunity to come up and harrass everyone on the weekends.
It was on one of those weekends that my brother returned from a trip to the store with a monstrous, bright blue, 34-ounce, insulated mug called a Bubba Keg.

I hated it on sight.

I've never been a fan of the oversized drink container, insulated or no. I can't debate it with you; I don't know why. Something about them just screams glutteny to me. Maybe if I were gearing up to hike the Appalacian Trail,or launching my hot air balloon toward the equator, or if I had just captured an escaped boa constrictor and needed something in which to transplant it safely back to the zoo, you might be able to convince me to consider the practicality of such an item.

Then again, maybe not. My prejudices run pretty deep.

I must have curled my lip at it. Maybe, as Tawana says, I let my "church face hang out." Either way, despite my having said nary a word about it, my brother knew that something about his new Bubba Keg offended my sensabilities.

And brothers, as you know, love that kind of thing.

He carried it into the kitchen, washed it out, and filled it to the brim with ice and diet soda.

And then he shook it at me all day long.

"Hear that?" (shakeshakeshake) "Still has ice."

"Hold on." (shakeshakeshake) "I needa drink."

He shook it at me over cards and over chip and dip. He shook it at me as we watched TV. He was still shaking it at me as I drove away. A week later, my mother packed up and drove back to New Mexico, and a few days after that, my brother and Super Tara lassoed and packed up their little chicken-nugget-hiding Chihuahua and headed back to Tennessee.

They left cool vacation food I probably wouldn't buy--Dove's Ice Cream Bars and imported beer and a freezer full of steaks and buffalo wings. Mom planted flowers and landscaped the walkway down to the lake. I've been here four days, now--long enough to see that it really is a great place to get away from it all. Private. Quiet. Much bigger than it was when everyone was here at the same time.

The cat watches the birds and the squirrels and the neighbors. I sit and write on the back deck until the afternoon heat drives me indoors. There are naps to be had, and books to read. I have almost everything I need. In fact, it's pretty much perfect.

Well, it is now. Yesterday, I went to the store and bought a monstrous, olive green, 34-ounce, insulated mug called a Bubba Keg.

Hear that? (shakeshakeshake) Still has ice.

The writing group thought about crashing your nirvana. We still might.

That would rawk in so many ways.