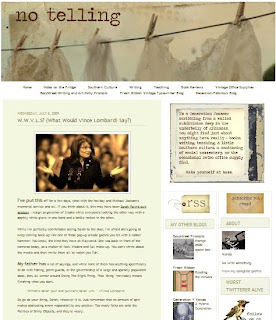 These days, if you want to know something about something, it's easy enough to just meander over to the internet machine.

Which is how I came to be reading the blogs of my co-workers.

If you work at a bank, you might also have bloggers in your midst--but chances are, they aren't of the same caliber as the bloggers who make their living teaching other people how to write. I'm sorry; it's hard to hear, I know, but there you go.

Which is to say, I would read these blogs even if I didn't know the people who were writing them. It's time to add some of them to my sidebar linkedness, but as you know, only reviewed sites go on the blogroll. That's the policy.

She doesn't know it yet, but Monda over at No Telling is about to be my new best friend. When the new semester starts, I'll be moving into the office next door to hers (not my idea, but one I got behind right away, since there's a window involved), and she is--believe it or not--one of those people who is as entertaining in person as she can be on the page. Her blog is a mix of politics, current events, nostalgia, her take on writing and the teaching of writing, book reviews, and tell-your-mama-I-said-hey Southern culture.

So landing on her page can feel a bit like walking the carnival midway; she's a three-column blogger, and there's a lot to see. She's prolific--maintaining three other blogs in addition to No Telling. Who knew there would be so much worth saying about vintage typewriters? (There is, as it turns out.)

It's the left hand column, though, that keeps me coming back.

I'm guessing it will have the same effect on you. Even if you didn't keep your treasures in a Roi-Tan box or wear abandoned locust shells on your shirt (and yes, I guess there may be some of you above the Mason-Dixon Line who did not), there's a lot to admire about the writing in What This Country Needs Is A Cheap Cigar Box:

In late August I always had a fine collection of locust shells carefully picked from tree bark, screened doors, and other scratchy, irregular places. These were particularly prone to crushing in, say, the back pocket of your jeans, so a sturdy cigar box was essential. My neighborhood friends and I would travel in rangy packs like out-of-season Easter egg hunters, some of us with empty mayonnaise jars but most of us with cigar boxes. We could kill entire afternoons looking for locust shells and sticking their hooked little empty feet to our clothes and hair. After scaring my mother with them at dinner, they were always carefully placed back in the King Edwards box and spent the night under my bed.

I don't know what those kids with the mayonnaise jars did. Those were for lightning-bugs anyway.

I knew this girl, I'm almost sure of it.

Her writing takes me back, true--but there's more to this piece than mere nostalgia. Any writer will tell you that it's easy enough to write 500 or so words remembering when--not so easy to find a 21st-century hook to hang them on. I never get the feeling that she's just meandering down memory lane. The point--once she gets to it--is well worth the tip. She's funny, too--especially when handing their hats to that day's celebrity/politician/village idiot. And when she writes about her daughter and her perfect grandson, she gets me right (chest pound) here.

And that's not easy to do.

So does this mean you'll let me sit in your office every now then to look out the window?