The best thing is to wear pantyhose under a short skirt, I think. And you can always take off the skirt and use it as a cape. 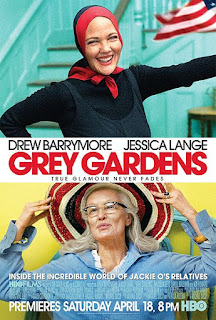 I hope the 23 of you out there who haven't already seen the original documentary will do so, though, before sitting down to watch Sister Barrymore live up to the family name. You can rent them both for a double feature.

I'm also pretty excited about the complete first season of Thirtysomething, finally out on DVD August 25th. I know, I know--Faludi doesn't approve. And even though it could cost me my NOW card, I just can't help myself, dammit. (Oh Melissa--you quirky, single-earring-wearing mess--I've missed you.)

I'll wait until I've seen it again before recommending it to all you young whippersnappers. Who knows? Yuppy angst might not be that compelling, all these years later.

Meanwhile, the poor Echo Boomers are still waiting for Daria, which is rumored to be released on DVD sometime in 2010. Yeah, that's how they keep you on the line--rumors of release. Hang in there, kids. 18 years will fly by before you know it.

It's in the mail box. Or will be by noon. Though I have not watched the first edition documentary I am excited to watch Drew B's version anyway.

I watched Thirty Something from behind the couch every week with my Mom. I'm sure she knew.