I'm sorry. Could you repeat that? 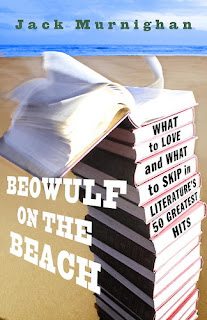 While discussing his new book, Beowulf on the Beach, author Jack Murnighan confessed to NPR's Liane Hansen that he believes it better to read one book twice, than to read two different books. He feels that the read is richer, the second time around.

I'd been thinking about this exact thing, and had a tentative plan to talk about it here. I was just letting it stew until a plan of approach presented itself to me. Thank you, Jack Murnighan.

English majors are all about reading the same books over and over again. Although I did read all the books my university said I needed to read in order to be an educated person (and to understand Woody Allen's jokes) I can't offer up so much as a synopsis to prove that I did. In fact, many of the subjects on which I consider myself to be something of an expert (the monstrous feminine, gothic literature, the Peculiar Institution) are subjects that experience has taught me to avoid in conversation:

Me: You know, Stoker's Dracula is frightening only because the vampire is feminine in nature.

Fred: Really? How so?

If you happen to suffer from mooshy brains, as I obviously do, reading the same book over again might not have been the original plan. Maybe you've forgotten that you'd read this particular title, or maybe the publisher changed the cover design when the book crossed over into paperback. When this happens to me (and it happens a lot), I just keep reading. Chances are, I don't remember enough about the book to give anything away. The down side of this is that if you're another English major, and you want me to deconstruct with you, you'll have to let me re-read and then catch me before the experience expires.

(I don't know what my brain bucket is protecting, but I think we can rule out how-to-get-there-from-here, my PIN, and anything I learned in college. Maybe I'm carrying around old CSI storylines, up there.)

On nights when I'm too tired and stupid to read myself to sleep, I like listening to books on CD. It wasn't long before I realized that I liked listening to the same ones--over and over. Whether I'm listening to David Sedaris (that's a line from the audio version of his story Six to Eight Black Men in the blog title, and it's probably only hilarious to me because I have heard him deliver it in exactly the same way 211 times), or Seamus Heaney's translation of Beowulf, what I hear depends--in large part--on what I'm listening for.

It's not just because I can't remember my own address that every book is a new experience--regardless of whether or not I've read it before. It's because books are dynamic; they change, depending on who is reading them, and where in life that who happens to be standing. (Read Tan's Joy Luck Club as a twenty-year-old single woman and then again after you've had a daughter.)

So, yeah, it's great that Murnighan is encouraging us to re-read. But do me a favor? When you get to the part he suggests that you skip, give it a look-see. You never know--the part that speaks directly to you might be right there, waiting for you to come along. And you'll never know if you skip it.


My top 5 list of books worth reading over and over again:


You can read an excerpt of Beowulf on the Beach over on Murnighan's site. I really wish he had asked me about this book's cover design, though. It's awful.

I LOVE John Irving. Though the one I've read over and over again is "A Prayer for Owen Meaney." My habit of reading the same books over and over again began as a kid. The ones I've read most often? "Little Women," "Anne Frank: Diary of a Young Girl," "Contact," and "To Kill a Mockingbird." I need to get a cheap paperback of TKAM because my husband just started reading my copy, and it's a special edition that was a gift from my grandparents. I had to tell him he wasn't allowed to bring it to the beach yesterday.

I love Owen Meaney! After the first few pages, EVERY TIME OWEN SPEAKS I just lose it.

I guess I didn't realize it until just this minute, but doesn't the publication of this book predate email and the interweb (as we know it?) Little Owen Meaney was shouting in all caps way before the rest of us.

Mark and I often rent a movie we've already seen and don't realize it until fifteen minutes in! But then we turn it off.

I'll take you up on the suggestion to re-read Amy Tan. I believe I *was* 21 and single when I last read that book.

This book you speak of was our topic of conversation at dinner last night. Phil pretty much decided to take the 5 books he recommends and try to read them this year. That should keep him busy.

I'm not going to read his 5 favorite books. My head hurts already from taking care of a 2 year old. I don't need any extra challenges right now.

I love Owen Meaney, too. But I hate the rip off movie that should never have even been compared to the original book. Hate.

I know there are a number of novels I have read over the years that seem entirely different from one reading to the next... as my frame of reference changes over the years, something I read years ago I might now view it in a different light. a pair of my "re-readers" are "The Talisman" by Stephen King and "Assumption of Risk", Michael Stackpole. The latter of the two likely isn't your speed :)