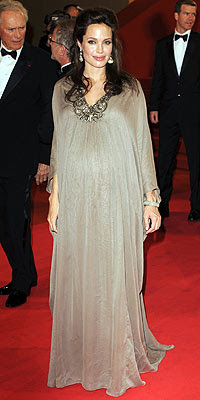 Add my mail carrier to the list of people with whom I can no longer make eye-contact.
I ordered an internet service that came with a free magazine subscription. I was so ambivalent about the choices I was given that I didn't bother selecting a preference.
So the internet service made a selection for me; they decided to send me Us Weekly. It's a fairly lowbrow approach to photojournalism, and it embarrasses me every time I find it in the mailbox.

Then there's that other thing.

Before now, I would have said that I was pretty savvy--culturally speaking. But I don't know who any of these people are. Yes, there are the occasional shots of Madonna in her work-out clothes, and Jennifer Aniston, poolside in a bikini. Almost every issue has at least one picture of Angelina Jolie in a huge gauze caftan.

Yesterday I went through last week's issue with a fine toothed comb, and the only people I managed to identify with certainty were the older ones whose cellulite and turkey necks the photographers had captured via infrared telephoto lenses. What a waste of time, money, and resources.

I don't need a magazine and horde of paparazzi to see that.