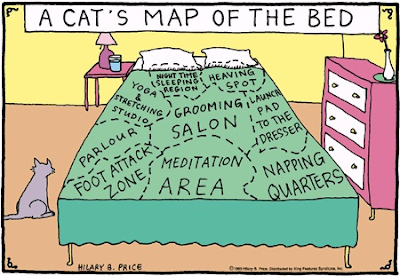 One might suppose that someone who is almost always lost (someone like me) would be a big believer in maps.
And I do believe in Web site maps. I like maps that show which states are red, and which are blue. Brain mapping is almost always interesting to read about, and DNA mapping is helping science understand why some of us will get Alzheimer's, and why some of us will not.
A real map--one that helps its owner successfully navigate from point A to point B--sounds like a smart idea, until you present such a map to someone with absolutely no sense of direction. For that person (someone like me), a map just serves to postpone the inevitable. When armed with a map, an average of 45 minutes must pass before I will admit to being hopelessly and irredeemably lost and call back to the settlement for a search party.

Unless and until I find someone who is prepared to take responsibility for getting me where I need to go, I will continue to be the last one to the party. Which explains why I'm probably the last person trolling the intertubes to land at the blog Strange Maps.

I lost all kinds of time yesterday exploring the floor plan of 221B Baker Street, a Swiss Airlines North American Route map that is just wrong-wrong-wrong, a map of Stephen King's Maine indicating where among the real towns his fictional towns are located, a map of Heaven, a map of the United Shapes of America and way more.

And the very best part? Nobody had to come get me.