Hey, you. Take it outside. 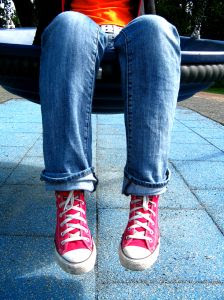 One morning a couple of weeks ago, a group of us who were congregated around the coffeepot began talking about the things we used to do on the playground.

Turns out, girlhood is pretty much the same, no matter where you spent it--hanging out upside down at the monkey-bars with your very best friend, standing in line to play tether ball, splitting off to play four-square or Chinese jump rope. As we stood there drinking coffee and talking, one thing led to another, and suddenly we were engrossed in a may-as-well-be-fourth-grade, to-the-death, hand-clapping game.
It was the best five minutes of my entire week.

It's occurred to me since that it's been a really long time since I've played at anything. Oh, I'm a great believer in having fun where I find it (especially at the expense of someone else). I try to keep a couple evenings open throughout the year for the all-out, all-beer-and-acoustic-disco sing-a-longs my friends and I enjoy. And I'm not the only one. Every time my friend Tawana disappears on a weekend, I know she's gone back to the casino to take other people's poker money. And there are lots and lots of people (mostly men) who would never miss a weekend out on the golf course.

But for the most part, being able to play just for the sake of doing so is something we lose the minute our children stop using us as substitute playmates.

I seem to remember that it was easier to really bring it during the day if I knew I was going to get to blow off some steam later on the playground. And besides getting us out of their hair so they could grab a smoke in the teachers' lounge--wasn't that something the faculty were trying to teach us about our future in the world o' work? First, work really hard; then you get to play.
What they neglected to tell us, though, was that we were going to leave all those games we had mastered in the schoolyard. Even if you were the best hopscotch player in all of four counties, you were still required to leave your title behind when you moved on to middle school. I lost a lot of cred when I went on to sixth grade.

After thinking about it for a while, I've decided that if I can get my hands on a handful of jacks, some chalk, some jump rope, and a couple of kick balls, I can greatly increase the output of my department. We'll work really hard, and then we'll play. Let the rest of the world struggle under the whip; I'm gonna use a little dodgeball to get some heart-stopping copy from these folks.
But not before I totally kick some double-dutch ass.
photo, Martin Boose.

Jane, this is one time I buy into your idea 100%. I'm waiting with bated breath to see if you can actually pull this off without throwing a hip out of joint or spraining that weak ankle you have. By the way, didn't someone mention that tomorrow was your birthday. I think it was in one of those notes your Mom sent.