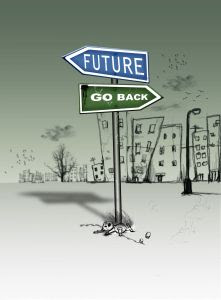 I've been thinking of late about New Year's resolutions.
Maybe this seems a bit premature to you--after all, we haven't even seen the tail end of Christmas yet. But remember, you'll be standing in whatever place you usually stand on everybody-go-out-and-get-blind-drunk-night in a mere two weeks' time.*
So, it's high time you start thinking about your resolution, if you're in the habit of such things. I offer this reminder purely as a professional courtesy. I myself don't believe I've ever resolved to do anything on New Years' Day, unless you count the stalwart assertion that under no circumstances would I allow anyone to make me eat black-eyed peas and ham hocks. I can resolve and then recant any old day of the week. I don’t need a National Holiday to help me do it.
If I had any bad habits (and I'm not saying I do) I already know that resolving to give them up would just destine me to failure. Decades of wasted time, money, and effort have taught me that once I make it official--whatever it is--it's just no fun anymore. Back in the eighties, I was more than happy to Jazzercise myself to the point of heatstroke every afternoon--until somebody convinced me to join the fitness club. As soon as my check cleared the bank, I didn't want to go anymore. If I were to join the National Breathing Association, I'd have to lay down and die right here and now. I just can't be happy as a part of a large, organized effort.
As a writer, the only thing I hate worse than penning a cliche, is being one. I think I'd rather change my life on a day when nobody's paying the least bit of attention. At least that way, I'm the only one who knows that I don't have what it takes to cut in in Jazzercise.
graphic, Zoran Ožetski.
*As for me, I haven't been able to think of anything else since I realized that we were about to turn our calendars over to the year 2008. Why, that's just almost 2010! Look at it--2010. That's blade runner talk there, and I'm not ready. Inexplicably, I still occasionally date my checks 2004!

Happy Birthday from the snowy 8 degree east coast! Tawana says that anything you write about her isn't true but we know better and also know that you have much more ammo where she is concerned.

Many happy returns of the day!
(Pooh Bear)