Faster than a speeding ovum. 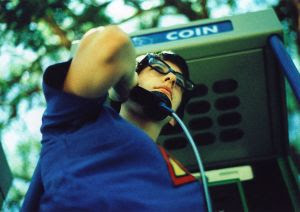 People who know me (even a little bit), know that I have a tendency to say even those things that would be better left unsaid. But in my own defense, you should know that I almost never let things fall out that are patently unkind.
Lately, though, I've noticed a decrease in my already weakened censoring abilities. I have on occasion been actually thinking the words, "Don't say it," even as the offending tidbit was rolling off my tongue. It doesn't help that most of my unfiltered comments are directed at people who have no first-hand experience with the menopausal phenomenon. The victims of my faux pas are so obviously taken aback that they may as well just say the words, "crazy old lady," and be done with it.
My friend Tawana is having a difficult time of it as well, but she seems to believe that the breakdown of her heretofore fully-functioning filtering device has endowed her with special menopausal powers.
Apparently, she's become indestructible.
This month alone she has *(1) blatantly defied an airline attendant's direct order, (2) behaved obstinately in response to a traffic cop's instructions, (3) ridiculed a stranger (to his face) about the condition of his unmatched socks, and (4) berated the checkout clerk at the grocery store for never-ever saying "thank you" at the conclusion of their transactions. I'll give you a moment to ponder the irony of this last example.
If I had tried any of the above, I would be escorted off the plane, carried away to jail, cursed, and asked to leave without my Diet Cokes.
Because you just can't pull that crap down here--special powers or no. If a flight attendant instructs you to close up your cell phone, you might buy some time with, "No thank you, I don't believe I care to," but you will do it, and be damn glad for the opportunity. Don't let the corn-pone accent fool you--folks around here just don't truck with any of that Northern sassiness.
Tawana's a transplant, so she knows this stuff. But she's allowed herself to forget, and has lost sight of the fact that you have to use the power of the dying ovum for good--never evil. Consequently, every time she comes home, I stay worried to death for her. I just don't think it's truly dawned on her that her special powers won't work here on her home planet of Kryptonite. One of these trips back, her old dried-up-Miss-Haversham eggs are going to get her into real trouble.
It's just a matter of time before someone wraps her up in her own cape and Billy Joe McAllisters her right off the I-40 Bridge. And I'm going to be powerless to do a thing about it.
photo, Laura Kennedy
*I will not be describing the conversation that took place on Wednesday between Tawana and a coworker when the latter made the unfortunate decision to park in Tawana's parking space because I love Tawana and don't want you to think she's an ass.

Hot flashes and a southern accent will get you everywhere north of the Mason/Dixon line. Us northern menopausal women do not stand a chance.

You forgot to include the whole menopausal phenomenon. It's not just the words falling out of one's mouth it's also the look, the intonation of words that are about to hit pure air and carry like missles, it's that stance one takes just before delivery. It is the whole ambiance of the act. Leaving the recipient not only scared to respond but even too scared to move. Innocent bystanders watching this phenomenon take place can only hope the "menopausaser" doesn't begin to hurl bullets their direction.