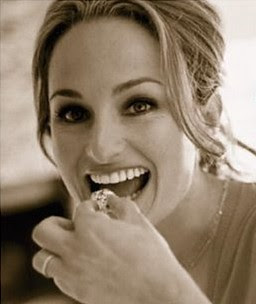 Here's something you might not know.
College students love-love-love the Food Network.

Which is somewhat confusing to me, seeing as most college students prepare only three carbo-loaded menus: spaghetti with beer, peanut butter and jelly with beer, and Poptarts with beer. Round-the-clock cooking shows seem to me to be superfluous, if those three menus are your only interests--unless, I suppose, your focus is on perfecting your technique.
Yet every student I've ever known will spend days staring dumbstruck at the Food Network. They'll watch it all, but they're most enamoured of Giada De Laurentiis and Paula Deen.
They do not, as a rule, care for Rachel Ray.

I don't watch a lot of TV myself, and I never, ever, sit staring for hours with my mouth hanging open. Unless that is, I've wandered cluelessly into the room when Ms. De Laurentiis is on screen. It's all fascinating, but the payoff comes when she finally eats whatever it is we've been watching her cook up.

"Wow, just look at how moist and juicy this moist juicy dish is!" and the flavor is so intense that she actually closes her eyes; she is all but overcome. The only time I remember being compelled to squeeze my eyes shut during a meal, I had shovelled a heaping teaspoon of Captain Crunch into my maw late one Saturday night without first checking the expiration date on the milk carton.

I get a little squinty and teared up thinking about it even now.

So though I am not an actual fan, I can quite understand the compulsion to sit for days and watch little Giada rattle those pots and pans. But what's the deal with Paula Deen? Notwithstanding the fact that both are television personalities who cook food for a living, there just don't seem to me to be many similarities between Giada and Paula Deen.

So last weekend, after catching Muffin Uptown glued to the Food Network again, I sat down quietly beside her on the couch.

"Hey, what's the attraction here?" I asked, and was just about to say something about chitlins when she stopped me in mid-snark.

It isn't just any beer mind you. It's PBR, the best beer almost no money can buy.

Plus, they support NPR.