Every bit as glorious as I remember. 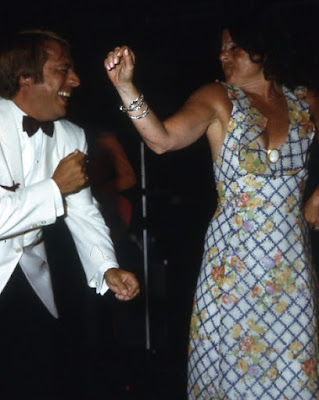 I haven't written anything hilarious or moving for you to read today because my creative juices are blocked. And I have no one but myself to blame.

Not long ago, an acquaintance asked if I would be game to attend a mock prom as his date. And although I can't be sure, here's what I think may have happened next.

I heard the word "date," and associated it with "dinner"--the extra special kind that I don't have to cook or pay for, and that's when I said, "Sure. I'm up for that."

What was I thinking?

I've had a chance to eat since then, and so the idea of a free meal has lost some of its appeal. In fact, having had time for some clear-headed reflection, I can see now that this may very well be the stupidest thing I've done all year.

It's my teen nightmare come true--it's time for the big dance, and I don't have anything to wear.

Six months ago, I had several of Muffin Uptown's old prom dresses, a couple of bridesmaid's dresses, and an incredibly trashy rhinestone getup that I once wore to sing with the ATU jazz band. But part of the big move was to divest myself of things I would never, ever need again, and so it all went into the donation bin.

And it must have been pretty good stuff, because it's gone already. In fact, it looks as though all the middle-aged sized teenagers have already done their resale prom shopping; there's just nothing left.

But that's not the only problem. Because my skin heard me say "prom," it immediately began production on a yes-I-know-we-just-had-menopause-but-I'm-not-done-with-you-yet pimple, conveniently and prominently located directly between my eyes. It's going to be huge and unattractive by Saturday, and I know this because it has sent out a press release. This Saturday, I'm virtually guaranteed to be the only inappropriately-dressed, 49-year-old woman at the prom with a big Cyclops pimple on her head.

Who knows if the possibilities for disaster end there? Even if I could manage everything else, the fact remains that I don't know this guy very well. This could be one of those Charlie Brown situations--you know what I'm talking about--where you're counting on him having all the information, but then you show up and find that it's some sort of serious thing that requires actual couture and an updo? I just can't get away from this nagging feeling that it's only Nancy Allen and a bucket of pig's blood away from full-out disaster.

So that's why I can't blog today. I gotta find a way out of this mess, and I need to do it now, while he still has time to find another date.

And before he picks up the corsage.

Oh come on Jane. Take a chance. Go dress shopping and decide to have the time of your life. Sometimes it actually works.

Besides, think of all the good stuff you'll have to post about later.

My mother thinks that if she signs in as Anonymous, I won't know that it's her.

Doesn't mean she isn't write, though. Especially the second one. I skipped prom in high school to go have other, more illegal types of fun with friends. Hearing about how awful it is always makes me feel ever more reassured of my decision.

Had I only know this a couple of weeks ago... in a closet at my mother's house are 2-3 really 80s formals that would be perfect for a mock prom.

Alas, at my house are only tasteful homecoming dresses that I will let my daughter out of the house in...