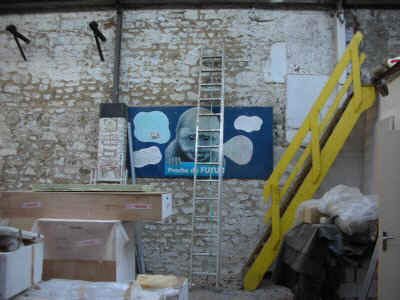 After yesterday's post, maybe you were wondering if I had stashed my Muffin Uptown in an overhead cabinet or slid her under the bed with the extra cat hair. If she had wanted to stay, I would have found a way to make it work, even if that meant having her stand in the corner and hold up the television.

Instead, MU is renting a studio space downtown, where she plans to live and make art until grad school next fall. For her, it's a dream come true.

To me, it looks like the men's room at a Texaco station. Only bigger. And colder. I keep trying to find ways to say, "Are you sure?" without making her think I don't trust her judgment. Mostly, what comes out is, "Have you lost your mind?"

But I can see where this would be a dream come true for any artist, especially one (like MU) who makes big, messy, installation art. She can work until she's worn out, wander over to a pile of sticks and straw on the floor, and fall into exhausted slumber. The next morning, after brushing her teeth in the utility sink, she's ready to begin again.

Part of this is my fault. Throughout her childhood, she lived in old houses as we restored them and turned them into homes. She loves cracks in the plaster and uneven floors as much as her mom. She thinks she can make it habitable through shear force of will.

But even if she can't turn it into what you or I would think of as a home, she'll be okay. Other art students have lived and rented in this same space, and have lived to tell the tale. Living there will be something she can look back on when she's old and settled. She'll be fine. Really.
I, on the other hand, will be miserable--because every time I reach for the thermostat, I'm going to feel guilty.

It looks like it's going to be a cold, lonely winter.