The Winglet, and why---even if they figure out the best use for it---I probably won't be getting one. 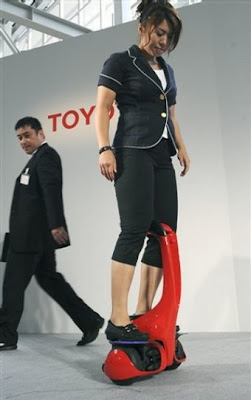 Toyota has developed a "personal transport robot," and is currently testing it to determine the best market. It's light enough to carry, has special sensors allowing it to be guided by simply shifting body weight, and features a narrow design--just wide enough to stand upon while still allowing users to share the same sidewalk as the unwingletted population.

Toyota is right this very minute testing the Winglet in airports, resorts, and shopping malls in an effort to pinpoint the best practical application.
Fine.

I predict potential problems for the marketers of this device. Sure, it comes in a jaunty red color and it's shaped sort of like the futuristic razor I use every day, but it's not exactly sexy, is it?

Just ask any woman on the planet. She'll tell you--there's just nothing as becoming to the female physique as standing with your knees pressed tightly together.

And that pinwheel action I'd be doing with my arms? Stunning.
See it in action here.

How do you ride this thing if you have on a suit and heels and are carrying a suitcase and laptop? I'm sure someone out there wants to know.