Talk about getting the cart in front of the cow. 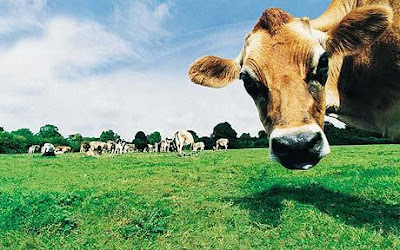 It's hard to learn a new gig--finding your way around, learning the names and chocolate preferences of the most powerful secretaries, remembering that your office is now on the third floor instead of the second, and just generally doing your damnedest not to screw it all up.
I've missed the opportunity to make fun of a lot of good stuff over the last week or so. And usually, I don't really want any after everybody else has taken a bite of it. But I don't think I can resist going back and asking why it would be that the world's scientists are just now noticing that all the cows are pointing in the same direction, as observed on Google Earth.

My sociology professor knew that in 1980 and he took his entire class to a farm to point out this phenomenon. So I think of anyone get's the credit for this insight, it should be Dr. Calvin Dunham, retired.