Well, thanks a lot, TCM. 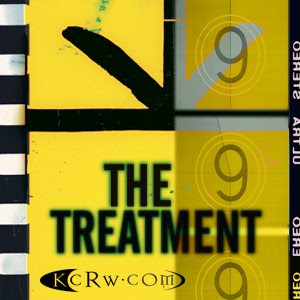 The NPR affiliate in my part of the world carries KCRW's The Treatment. I like it a lot. Elvis Mitchell is so smart; he's forgotten more things about movies and popular culture than I will ever know. This doesn't represent a huge self-disclosure on my part. Mitchell's on NPR, I'm an NPR junkie, and anyone who cares enough to think about it for a second could deduce that I am, therefore, a big-ole Mitchell fan.
But what you might not know about me is that I don't like my intellectual programming mixing it up. I don't want the juice from my radio green peas running into and interfering with the taste of my television potatoes. It makes me uncomfortable when NPR fraternizes with CBS. Radio is for listening. I don't need to know that Michael Feldman looks like the guy who lives next door to me and sits in his driveway every afternoon in a folding lawn chair. I enjoyed Garrison Keillor's writing much more when he looked like the picture in my head, instead of--well--Garrison Keillor. And I don't care how much you beg, I'm not looking at pictures of Nina Totenberg or Michelle Norris. Just put those away, you sick bastard.

And just so you know--I'm not the first person who has written of this. Lots of us don't want a good look at the people we depend on to tell us what we think of each day's pressing issues and news-worthy events. Most of the time, this is not a problem. Until everybody else discovered Ira Glass and David Sedaris, you pretty much had to go to NPR to find them.

But Elvis Mitchell represented something more to me. Listening to his voice--marveling at all the knowledge this young man seemed to have right there at his fingertips--for years, Mitchell filled me with hope for the future of humankind. I was no longer overcome with dismay when I considered the rapid aging and decline of our country's cultural scholars. Why worry? When this batch of smart folks done shuffled off this mortal coil, Elvis Mitchell will still be here. He'll help see to the perpetuation of rational thought for the new times.

And then on Sunday, I caught him (and all his gray hair) on his new show on TCM.

Turns out the dude is a year older than I am.

Your at least partially to blame for the media getting wind of Ira Glass. How many times have you raved about him on your blog? I'm not sure I even knew he existed until I read it on your blog.
From a dedicated reader of mundanejane.

See? Just one more reason Mr. Glass needs to get in touch with me...