It's all in the planning. 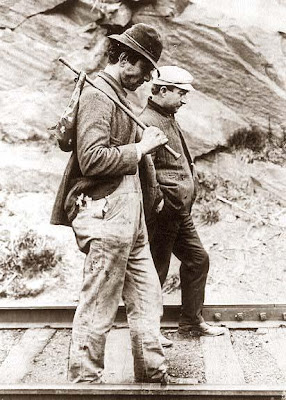 Here's what I've learned from having a high-pressure, do-or-die career in the fast lane: you gotta have a plan. When thinking of my plan, I like to think of it as (you guessed it), Plan A. This is because there must be a way to differentiate the main plan from the auxiliary back-up contingency plan that you will almost certainly also need.
This plan, I most generally designate as Plan B.

On Saturday, however, I had no plan at all. I rolled around on my couch all day under Friday's hair, wearing Friday night's pajamas, watching movies on the intertubes and eating whatever I could find in my kitchen that didn't require the use of a pan, plate, or utensils. By the time I crawled into bed at 3 am on Sunday morning, I realized that unless I meant to show up at work on Monday covered in bedsores, it would be a good idea to hatch myself one of those plans.
And that was the situation on Sunday morning, when I loaded my iPod with Moth podcasts, put on my first pair of shorts for the summer, and somehow managed to find and squeeze my way into a sports bra. I put on my walking shoes, loaded my pockets with cell phone, nasal spray, and house key, and poked my puny pony-tail through the back of my cap. With remarkably little fanfare, Plan A was thus initiated.
I reasoned that if I could walk as far away from my house as half an hour would get me, by the time I turned around and made it back home, I would have traversed roughly three miles. Although I could have gotten a more precise measurement of the distance by driving the route by car first, this would have required an additional level of planning to the planning of my plan.
As I locked the front door, I had it in mind that I would listen to two moth podcasts before turning around. These podcasts usually last between 10 and 15 minutes each, so the combined total for two episodes would be close enough to half an hour for my purposes. I would be so engrossed in the hilarity coming from my earbuds that the mile and a half would seem to fly from beneath my feet, and being completely engrossed in the podcast would keep me from looking at my watch every four minutes or so. Because really--when was the last time you saw a dedicated runner or walker checking his or her watch?

As you can no doubt see, I had planned it all very carefully.
Twelve minutes into my walk, just as the first Moth podcast was ending, I realized that I really, really needed to pee. Unbelievably--even though I am a woman of a certain age whose bladder fills to bursting about twice every hour--I had neglected to take the idiosyncrasies of my middle-aged internal organs into consideration while developing my plan.

Alas, short of squatting behind a tree, I had no choice but to proceed as planned. So, I clenched my teeth (and other things) and continued my trek away from home. Moth podcast two began. Not very long into this podcast, I was becoming aware of developing blisters on each of my feet. By now, two unforeseen complications had arisen that were seriously threatening the successful completion of Plan A.

This might be a good place to tell you that I didn't choose the secluded streets of my immediate neighborhood for my walk--because I had in mind that I wanted a real sidewalk beneath me, I walked a block up from the house to one of the more heavily traveled main roads on my side of town. And so, at 9:40 am on Sunday morning, one-fourth of the town's church-going population was zinging past me at speeds that made me frightened for life and limb--even from my position in the center of the sidewalk. Although it did not feel as though it offered much in the realm of safety, my position on this sidewalk did afford fortunate passers-by with a keen view of me as I limped, shuffled, and scuttled in the opposite direction of my home, my band-aids, and my bathroom. By then, I could no more have told you what I was listening to on my iPod than I could have taken wing and flown my way back home.

Not quite fourteen minutes had elapsed since I had left my front stoop.

Despite all my careful planning, my walk was not turning out the way I had hoped. Less than half an hour from home, and I was on the Bataan Death March. Drawing on all my many years' experience in situational evaluation and subsequent decision-making, I chose to then institute the all-important Plan B: Turn around and get my ass back to the house before one of my feet fell off or I peed in my pants.

I'm happy to report to you now that I do still have both feet.

About The Moth Podcast: "The Moth, a not-for-profit storytelling organization, was founded in New York in 1997 by poet and novelist George Dawes Green, who wanted to recreate in New York the feeling of sultry summer evenings on his native St. Simon's Island, Georgia, where he and a small circle of friends would gather to spin spellbinding tales on his friend Wanda's porch." Listen here.

Next time plan your route in terms of where the accessible bathrooms are. Ask any runner or walker (except guys who just use the next convenient bush or tree)and they can tell you where every restroom is on every route they have ever been on. McDonald's restrooms are great for walkers. Easily accessible from the outside door and large enough so you seldom have to wait. But here's a warning, never look towards the order counter.