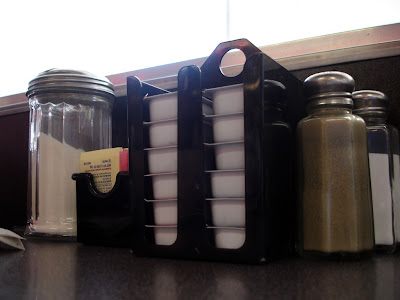 I sat with my mother yesterday morning in the last restaurant in town that still serves a decent Sunday breakfast. It's sort of a dive, but they get the eggs right most of the time. Eating there is less of a problem for me now than it might have been five years ago. Unless I put my face right up against the windows or drag my finger along the crumb-dusted floorboards, most of what I can't see won't hurt me.
We were waiting for our waitress to return from her Mars landing trip, and Mom was telling me that peanut M&Ms should not be considered an acceptable meal substitute. Those kinds of calories can really add up, she tells me, and that--in and of itself--might go a long way toward explaining the inexplicable weight gain I've been complaining about of late.
"Do you think that guy is too old for me?" I asked.

"That guy--in the corner booth. Do you think he's too old for me? Cause I can't tell anymore. I get all flirty while waiting in the Starbucks line, and then the guy calls me Ma'am. But that guy wouldn't call me Ma'am. I just wonder if he's too old?"

"I could go out with a guy in his fifties. Don'cha think?"

And neither one of us was taking any pains to disguise the fact that we were talking about him. If he had bothered to look, he would have seen us. This occurred to me at the very same moment that I remembered I was sitting there under my weekend hair, without makeup, and wearing my favorite manpants and see-through black t-shirt.

"Nevermind," I said. "You gonna eat that bacon?"

I saw you there, HL, as you were leaving. But as I said, I am reticent to get too close to the glass, so I didn't rap on the window to wave hello/goodbye.

Your right about not looking too close at the floor and windows there. Just in case you haven't figured it out, always check the inside of your coffee cup before you let the wait person pour the coffee. Once in a while yesterdays egg or pancake is stuck to the sides and bottom. But the price is right, the eggs are over medium when you ask for over medium and the staff is friendly. Sorry I missed you. I would have loved to have seen you in your weekend hair and man pants. HL