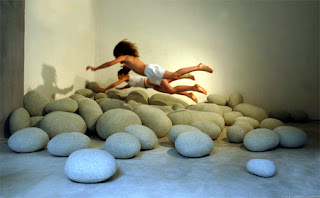 I really like the idea of having these Livingstones indoor cushions in my house, where I would like to use them in place of furniture. I like that idea almost as much as I like the idea of a new La-Z-Boy deluxe recliner parked in the functional center of my living room, and which I would use in place of moving around and doing anything productive. Ever.

As far as that goes, I wouldn't mind plopping either one down in front of a gigantic, big-screen LCD HDTV with surround sound home theater system.

And although I might be able to redecorate around a pile o' rocks or a man-chair, I can't see me ever getting one of those great-big-honking televisions. I simply can't afford it.

Not unless they invent one I can also drive to work.

I would much rather use a ball pit. (see "my" url)