Take a load off. 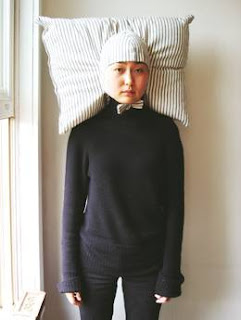 I was involuntarily involved in a conversation the other day in which one participant was itemizing all the tests her doctor had ordered after she reported being tired.

I remember almost nothing of what was said after the words "comprehensive metabolic panel." At "erythrocyte sedimentation rate," my eyes rolled into the back of my head and the world went totally and obliviously black. If I hadn't passed out, I'm fairly certain the conversation would still be going on, and you would have been able to swing by and hear all about it for yourself.
Were I to visit my doctor and complain of feeling fatigued, he would just look at me and say, “Well, lay the hell down.”

I'm still trying to decide what those of you who sleep on your faces should do.

found on swissmiss via bientotdemain.

Hey! Could you work Pillowigs into the budget for each of your premenopausal writers? We're tired of sitting under the cold air vents, shivering away. And besides that, we're just plain tired. What a great 2fer solution!

Thanks! LuLu and Sweet Pea