Not much; how about you? 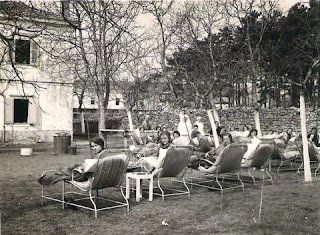 I've been off work for 11 days.
For the first 10 days, I watched television, ate, slept, surfed the net, read, slept, watched television, slept, went out to eat, and slept.
On the 11th day, I did all the crap I'd meant to do the first 10, and that had to be done before I could return to work on the 12th.
It's easy to understand how one might be deceived into believing me to be a lazy and slothful person. If--that is--one were not aware that I was actually conducting a very important and significant sociological experiment.
Here's what I was able to discover during my experimental fallow period:

That if you lie down every time the cat does, you will never be tired again. Although--and this is very important--it is possible to lie down for so long that you become too sore to move.
On a related note--it is also possible, due to lack of stimulus, to become so self-involved and hyper-aware of your own physicality so as to gradually (mistakenly) come to believe that you have lost all feeling in the pad of one toe.
That watching Bridezillas will make you cross and bad-tempered, even with people you have no intention of ever marrying.
That it is just as easy to not get something done because you don't want to do it, as it is to neglect doing something because you just don't have time for it.
On the other hand, all the fun things you love to do but never have time for suddenly lose a lot of their attraction, once you become aware that you can do them any damn time you want.

Which pretty much explains how I managed to do nothing at all for 10 straight days.