My mom will get it. 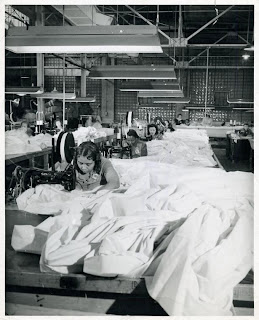 A warning to my sensitive readers: This post contains one instance of an inexpensive, all-purpose curse word, which I deemed necessary to content. So, please, if you are watching your daily curse word intake, come back tomorrow. I predict that to be an expletive-free post.
Although practically perfect in every way, Muffin Uptown has a very short fuse when it comes to balky mechanical equipment. I warned her about this when she asked for her first sewing machine. As those of us who already own these contraptions could easily have told her, sewing machines exist for the sole purpose of testing one's certitude in a higher, beneficent being. Anyone prone to crisis of conviction would be better served at the mourner's bench than in front of a sewing machine.
And MU's constancy? Well, she loses her shit when a zipper gets stuck.
She's building an ambitious art installation that involves PVC piping and yards and yards of fabric, and had a meeting scheduled with her advisor on Tuesday to evaluate her progress. It's been going well. So of course, the machine inexplicably stopped in the middle of the next-to-the-last, nine-foot-long seam.
She telephoned me at work to test both my diagnostic and prognostication skills. Normally so articulate, she was struck dumb in the face of total mechanical malfunction.
"Mom! My sewing machine is all messed up. The wheel thing won't turn and it doesn't work. Well, it will turn--but it's really, really hard and when it does, the other thing just moves back and forth, instead of up and down and nothing is happening. This is really making me mad. What's wrong with it?"

"What is that noise? What are you doing?"

"I'm turning the other wheel thing. But nothing is happening. Why won't it work? This is really making me mad."

"I think you should stop doing that--it isn't supposed to make that noise. Check the needle and make sure it isn't bent. Look for knotted up thread behind the bobbin. Check the presser foot."

Your right. Mom does get it. Poor child. When she went to high school they were teaching students how to calculate the distance to the stars instead of teaching them "Home Ec." which was short for being able to take apart and put together all kinds of household mechanical gadgets, including sewing machines.
Mom

Sarah, I want you to know that it took me the better part of a day to figure out why being a history minor had anything to do with "getting it!"