It seems a little late in the game to be raising this question, but-- 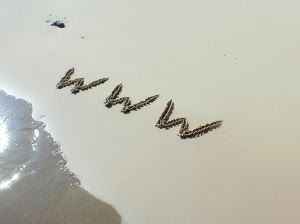 How important is the Web? This comes up all the time, in my line of work. But since the world wide wonder takes up so much of my free time, I wonder about it, too.
It's important in that it is useful. Dewey Decimal would still have me on the floor in a headlock, my thesis still unfinished, were it not for online libraries and catalogs. Because of the Web, I don't have to remember where I put the owner's manual for my digital camera, or wonder if it's my new medication or newly-attained middle age that's to blame for a sudden and unprecedented inclination toward gasiness.
Like everybody else I know, I go on line all the time--to pinpoint the name of a vaguely familiar-looking actor, look up a recipe, find out a movie time, or mapquest my way to the grocery store. As far as I'm concerned, useful equals important.
I suppose what I'm really trying to ask is whether or not the Web is relevant.
When something takes the interweb by storm--when everybody's doing it--does that make it apropos of anything real? When I and 70 million other bloggers are neglecting our basic hygiene and forgetting to pay our utility bills just so we can have our say about the latest thing, does that make the thing socially significant? Is our having our collective say about that thing socially significant? Maybe that thing and our commenting on that thing is only as culturally meaningful as, say, the latest mega-hit television show. If so, I'm putting an awfully lot of energy into this year's Dallas.
About 15 years ago, in an argument in which I was more fabulously wrong than I will ever be again, I patronizingly explained to a family friend that the World Wide Web everybody was abuzz about would be a total bust, because only the world's richest people would be able to afford access.
I've been trying to figure out what I think about it ever since.
photo, Rodolfo Clix.