In which I manage to free-associate an explanation as to what might have gone wrong with my second marriage. 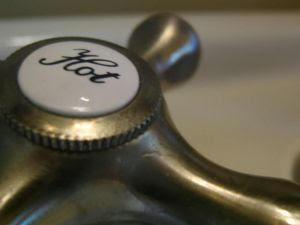 I spent some time deconing my bathroom on Sunday morning. In addition to the usual debris found in any working woman's bathroom, I found an earring I thought I'd lost in my daily travels and a five dollar bill. This last I found in the bottom of the trash basket as I emptied the trash. I haven't yet been able to come up with a reasonable scenario in which it ended up there. Maybe it was left by the tampon fairy.

But that does fairly adequately describe the general sense of chaos and disorganization at my house. Truly, it's no wonder that that I live alone.

But lo, the many years I was a married person, I squandered a lot of perfectly good ill feelings toward each of my respective beloveds for making such a mess of the house--most especially the bathroom. I won't go into detail as regards men and their lavatory habits; if you are or have ever been married, you already know that there's nothing I can say to make you laugh about it.

But I will tell you that my second husband grew up just about as far out in the country as you can live and still have a zip code. And while you can take Bill out of the hills, you can't--well, you know. Suffice it to say that he would have happily peed off the porch six times a day, given the opportunity. I see now that I should have encouraged him to do so.

You've got to be a special kind of person to willingly clean up after someone else in the bathroom. And I wanted to be that person, I really, really did. But after a few years, every Saturday morning as I again cleaned (somebody else's) whiskers out of the sink, I found myself wondering how many Diet Cokes I would have to give up each day to be able to afford to have someone else clean up in there. And as naturally happens when a woman starts thinking about cutting back on her carbonated caffeine consumption, I began wondering how many Diet Cokes it would cost me to have him killed.

"Why, if I lived alone," I thought, "my house would be virtually spotless."

And it was--for a long time. But then that Karma thing came to get me. Now, I can grow my own whiskers. And I seldom clean anything anymore, because I can only see dirt that is (1) two inches in front of my nose or (2) fifteen feet away. So most of the time, I don't realize how dirty my bathroom is until I walk into a wall and fall into the floor, where all the really disgusting stuff lives.
Which is how I happened to be cleaning my bathroom on Sunday morning.
Damn you, Karma. Again.
photo, DF.

OMG-That's too funny.You took the words right outta my mouth!
That's for the morning laugh:)