No, really--I walked into a door. Really. Alright, alright already, it was a wall--but the door was in on it. 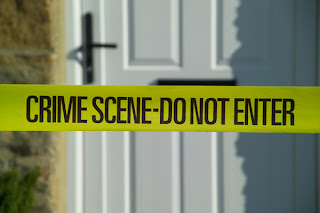 I sat around all weekend long waiting for somebody I know to do something funny, so I could poke fun at them and shame them in front of our friends. Tawana has been strangely silent, so I'm fairly certain that she's hiding something from me. For that matter, Muffin Uptown won't make eye-contact, and my mother has departed for parts unknown. So as usual, I have to do everything myself.
So here's what happened. Last night, some time during the threes, I got up from bed to use the facilities. I didn't really wake up for it--there was no need, really, since I knew the route by heart. I could do it with my eyes closed.
So I did.

I navigate my house with my eyes closed all the time. Without glasses, I'm blind as a baby hamster, anyway, so what's the diff?
Blind is one thing; stupid is a whole nother matter. Yes, I misplace several IQ points in that place between awake and asleep. But apparently, those are the very points I need in order to remember the lay of the land. As I left the bathroom to take the twelve what-I-thought-were-relatively-harmless steps between there and the bed, I turned one micro-second too soon and busted my brain bucket all over the bathroom wall.

The pictures on said wall rattled in their frames and the cat dove under the bed. I said, "Oomph! What the *!@&! was that?" and groped my way back to bed. It wasn't until the morning light revealed actual blood on my forehead that I became concerned.

Muffin Uptown, my long term-house guest, was oblivious to the whole thing. "What's all over your head?" she asked, when I finally stumbled out of the bedroom this morning.

And it's nice of her to ask, I suppose, but surely one of the perks of having someone else here--other than the fact that I can no longer watch TV in my underwear--must be so that there will be someone to attest to my final moments. "She cursed at the television and then, just--you know, sort of fell over."

What if I had actually damaged my dome in the middle of the night, stumbling around my darkened house like a drunk coming off an 8-day binge? What if, once I had gone back to bed, the cerebral hemotomas came and got me? No one would know until the CSIs had come, the rubber gloves snapped and the q-tips swabbed. There might even have been rumors of foul play, lists compiled of people I'd wronged who might like to see me come to harm.

Which means that not a single one of you is safe. I'd say it behooves each and every one of you to be sure that I don't do myself undue damage while stumbling around my house after midnight. Something could happen to me, you know.

You might want to work up a phone tree. This is going to be a really big job.

Tawana is strangely silent because she can't find you home or only has a chance to call during nap time of which neither is good. But your solitare does beg the question, what's up with mom? How come she isn't calling?

I'll call you shortly. Love, T
P.S. The phone is just left of the wall you hit and 90 degrees of north of Claire.

Yup, I knew once I started naming names that they would start crawling back out of the woodwork.

(Claire would be the cat, who does not get facetime on this blog, since said blog belongs to a middle-aged woman and that would be just too creepy.)

I love the concept of 'the threes' - so true.