The war on crack. 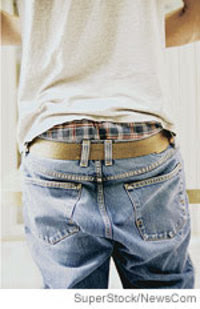 Once again, my home state has done me proud. Yesterday, a council member of the great city of Pine Bluff withdrew his proposal for a ban against baggy pants when it became obvious he was going to have to wear that stupid idea all by his lonesome.
Apparently, we don't cotton to having to look at other folks' cotton undies down here in the South: Florida, Texas, and Virginia state lawmakers all entertained the idea of a ban against "sagging," but ultimately thought better of it. Dallas and Atlanta are still thinking it over, and--no surprise, several Louisiana towns already have their ordinances on the books (because you know that's got to be that state's most pressing concern right now).
Notwithstanding that such an ordinance has to be constitutionally unsupportable, or that it is obviously another thinly-veiled attempt to legalize racial profiling (see bell hooks' fascinating thoughts on the attire of young urban black men), just who the heck do these council members and legislators think is going to enforce such a law--the trouser police? The pants po-po have been after me for years, and let me tell you, they are fairly easily eluded. If I had to pay a fine every time my breeches were poorly fitted, I wouldn't be able to afford the self-same very expensive, albeit unflattering, designer pants.

If it's just absolutely necessary that we legislate the way we wear our clothing, maybe our lawmakers could be convinced to concentrate on forcing men over 22 years' old wear their shirts in public, even when--especially when jogging on a public thoroughfare?

That's a law I could really get behind.