Since it's October, it must be time for a few words about Christmas. 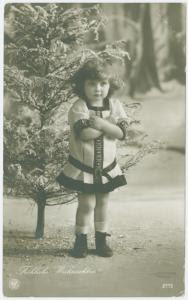 I find it incredibly ironic that any woman who is so discomfited by Christmas should find herself working at the one place in the world--other than Santa's workshop--where it's Christmas every single day of the live-long year.
I don't have a problem with the idea of a Christmas holiday on general principle, although I do think that me and mine could do with one less societal-endorsed reason to buy more crap.
And I have to say that if Christmas is something you really feel you absolutely must have, my company does it better than anyone. Virtually everyone who works there loves-loves-loves the holidays. But when the Christmas balls come out and the rosy-cheeked, turtle-necked models begin roaming the halls, I start looking for something to hide behind.
This is because when I was growing up, the advent of any major holiday meant that somebody was going to the emergency room. Or jail. Sometimes, my family made deposits in both facilities. Like every other family, we had holiday traditions: start drinking; raise hell; call the law; go in for stitches, when appropriate.
The first two weeks I was married, every time my new husband removed his belt and the buckle rattled, I peed my pants. At my first Thanksgiving dinner with the in-laws, my father-in-law reached for the mashed potatoes and I ducked. It took a lot of years' reconditioning to be able to tolerate the holidays without major pharmaceuticals.
That's pretty much all behind me now. These days, I just suffer a feeling of general unease that begins around Halloween and lasts through the New Year. It's been decades since the police have come to dinner, and the only time I have to go to the emergency room these days is when I topple over in my walker and break one of my brittle old bones.

And nobody in my family raises hell and puts a block under it for Christmas anymore.