Just wrong. In so many ways. 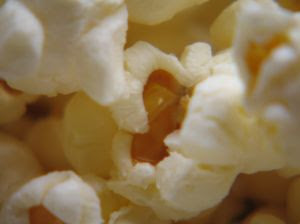 Okay, I wasn't going to, because it just seemed too easy. But the more I thought about it, the less able I was to walk away. So if you have a problem with a cheap shot every now and then, take it up with the management.
I know you heard about this. A 53-year-old Colorado man has come down with a rare form of lung disease that his doctors think was caused by eating butter-flavored microwave popcorn every day for over a decade. As a matter of fact, this man so loved his popcorn that he sometimes prepared and ate it twice a day. Apparently, he contracted the disease because it was his habit to open the bag and deeply inhale the faux buttery smell wafting out the top (which just so happened to also contain some sort of particulate matter that, as it turns out, really should not be inhaled).
Yeah, yeah, yeah--you already know that I don't need yet another thing that's going to give me cancer just because it tastes great and I don't know nothing about no self control. But you can get that story anywhere. You didn't come here for that.

Here's the thing I can't stop thinking about. Every single day for 10 years this guy's wife is watching him get up from the couch and meander his way into the kitchen to pop up some corn. He probably even says something exactly like that on his way there. "Well. I think I'll just pop me some corn." Although he may say it like it just then occurred to him, he says it exactly the same way, every single day. Because when you're living with someone, eventually you notice that they have a tendency to do the same things, over and over again.
She watches as he takes the package out of the wrapper, punches open the microwave, squints at the bag for a really long time to be sure that he's reading the This Side Up properly, sets it into the oven, and then jabs COOK-3-0-0-START. He's doing it and she's watching him do it at least once, sometimes twice, every single live-long day.
When the popping stops, he opens the bag and puts his nose down into all that third-degree-quality, pseudo-butter-smelling steam that's pouring up out the top. Each. And. Every. Time. And maybe he's scalded the brains right out of his frontal lobe a couple of times, but by the time he's popping again, he's forgotten, and so he just keeps right on poking his naked nose right down into that bag. His wife may have even said on occasion, "You know, that can't be good for you."
What she's not saying, but is almost certainly thinking by about the twenty-second thousandth time she's seen him do this, is that she's going to either by-God kill him dead or die herself if she has to watch this whole process go down even one more time.
Because that's just how it is when you're living with someone.
photo, Leonardo Morales
Hear a podcast of this post:

The extremely righteous music on this podcast is a remix of Feel My Pain Miss Jane, words, music, production, and performance by David Henderson.