Excuse me. Are you going to keep that? 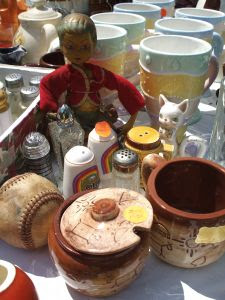 I'm not really into things. You might not know that to look at me or my home, since I have so many of them, but I'm not attached to them in any real, sentimental way. I'm just incredibly apathetic and don't want to deal with getting rid of them.
The one positive step I've taken in the past 6 months toward freeing myself from the shackles of over-ownership has been to issue a self-imposed moratorium on the purchasing of new stuff--notwithstanding the bloodthirsty feather pillows I purchased last month and their down-alternative replacements I bought on Saturday. And the new car I bought two weeks ago. And the--well, crap. Never mind.
But mostly, I've just been bringing stuff home that has a limited half-life. Paper towels. Hair creme. Diet Cokes. I don't need to haul anything else into the house that will ultimately represent another decision I have to make. When I'm sick of it, or when it doesn't work like it should, or when it's used up, I don't want to have to look at it and wonder, "What do I do with this now?" I know how to deal with an empty dental-floss container. I don't know what to do with the five throw-pillows that no longer go with my swanky decor, the George Foreman grill I never use, 300+ audio cassettes from the eighties, and every bank statement I've ever received.

If I can't pick it up and deal with it while on autopilot, I just truck it out to the garage. This solution works fine for me as long as I don't have to put my car away. If I ever have to hide my ride from an ex-husband or the repo man, I'm going to be out of luck.
So I've decided that what I really need to do is "work a trade."

When I was a child, the men in my family would loll about on the porch while the women prepared the big holiday or Sunday meal. Once or twice a year, the opportunity presented itself for one or more of them to work just such a trade. By the time the food was on the table, my mother might discover that my father had traded her favorite end-table for a coon dog, or that she was now the lucky owner of a new (to her) horse-head-sized, acorn-shaped ashtray in exchange for the ladder she thought important to the repainting of the house but to which my father objected just on general principle. (I was never clear if it was the ladder or the painting assignment to which he objected.)
The result of all this trading was that none of us was ever sure just what we owned outright. My brother and I took to parking our bikes at the neighbor's house, just in case my dad decided they were worth more in trade than in keeping us out of his hair. You may not be in a position to remember this, but a kid in the seventies without a bike had absolutely no street cred whatsoever.

Anyway, I happen to know Tawana owns a painting that Carol absolutely abhors and an almost-empty garage. So I'm getting Carol on the phone right this second, and by the time Tawana reads this post, it will be too late. I'll have a mediocre painting I can hide behind a door, and Tawana can figure out what to do with twenty-seven years of bank statements.
And therein lies the beauty of "working a trade."
photo, Andrew Beierle

I love it and I'm sure Butch will as well. Remember the new living room chair that was traded to grandpa for an older side chair I had hated when they owned it and a new pocket knife? What ever happened to that ugly green chair? Was that the one I left in the house when we sold it?
Mums

You should check out http://www.freecycle.org/

It is full of fun trades!

I am certain more than half those bank statements are mine. If you remember, back in the "work trade" boom in early 2000 I was going to mow your yard and you were going to balance my checking account. Your yard has been mowed. My account is still waiting. It's been seven years. If it weren't for this damn blog you could balance it today.