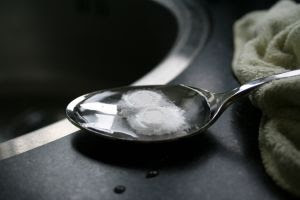 Congestion? Check. Headache? Check. Sinus pain and pressure? Check. Feeling generally putupon and unloved? Check.
One would think that a woman such as I--a woman who intensely dislikes sitting in the physician's waiting room with all those mucous-y sick people or standing in line for hours at the pharmacy (when I would much rather crawl onto the counter and ask someone to stroke my hair)--would have a more extensive stash in the medicine cabinet, just for contingencies such as this.

But, although I should be a professional self-medicator, my over-the-counter reserves are embarrassingly spartan. What I did have, however, was an unopened box of Alka-Seltzer Plus Cold medicine, New Improved Formula, in the Sparkling Original Flavor.
Expiration date 12/03.

You're not seriously asking if I took it anyway? Come on. You know I did.
There was a reason, as it happens, that this medicine was sitting unopened in my medicine cabinet for almost half a decade. It's just that nasty. I don't imagine its great age did anything to enhance the flavor. The ack-ing and associated carrying on brought neighbors to their front porches and ominous black birds circling overhead. The fabric of the universe tore, just the teeniest bit, in the upper left corner. I had to eat two cat treats to get the taste out from behind my teeth. (Take it easy--they were chicken, not salmon flavor).

And then it rawked my world.
Whether it was reaction to the trauma experienced in the taking of it or the ingredients that used to be in OTC medications before the tweakers discovered Walgreens, this. stuff. was. the. bomb.
I think I felt great. I couldn't tell you for sure, however, because I was in a coma most of the day. But while I was there, I think I felt great. When I came out of it, I was a new person for all of 25 minutes before the bottom fell out. Now I need another dose and I'm dreading it.
So I think I'm going to try dropping it into a jigger of gin. There's no expiration date on gin, is there?
photo, Jelle Boontje

Alcohol never expires, only gets more potent, like the alka-seltzer. I never did understand how anyone could take that fizzy stuff but I admire anyone with the guts to go for that combination. Let your readers know if it works. Thanks for the morning laugh, by the way.

Now that I've had a moment to reconsider, I think I'll just replace the Alka-Seltzer with vermouth.

Yeah, that should do it.