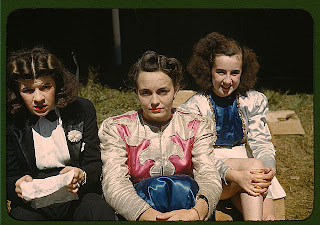 I know trouble when I see it.
Maybe I should say that I know trouble when I'm having breakfast with it. On Sunday, by the time I could see how much trouble I was in--well, it was way too late to avoid it.
Here's how it all went down.
On Saturday, I mentioned to Muffin Uptown's dad that I had, of late, been feeling the urge to have a small fixer upper. House. Again. Now that's no skin off his nose; for the eleven years we were married, he treated the location of the electric drill like a national secret. It wasn't until after we divorced that I bought my own power tools and started restoring houses.
When he next saw MU, he must have mentioned it to her.
So. Speaking from the relative ease and safety of the pleasure of Mom's hospitality (where she has been living while waiting for school to recommence and university housing to reopen), my child did what she regularly threatens me with doing.
She ratted me out to Tawana.
She waited until everyone was seated and served to announce, "Mom's thinking about moving again."
Even a talent as verbose as mine cannot adequately convey the level of animosity that descended upon our table. Several nearby diners quickly paid their checks and made for the exits. My breakfast partners, however, didn't notice--they were concentrating on giving me the stink-eye, all the while taking no pains to hide their malevolent intentions.
Everyone except Carol, who is--I am happy to point out to all--above that sort of thing. And has only helped me move twice.
photo, Jack Delano, 1914

Well if you do, count Mom out too.