Hold on. I got your soapbox right here. 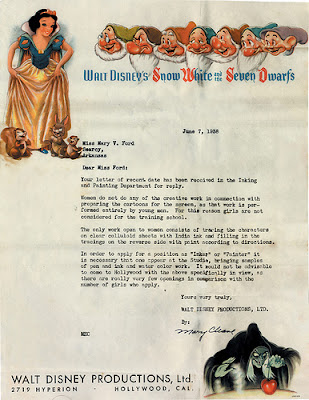 One of my friends sent this old letter (from sim sandwich's flicker photostream), asking that I forward it to Muffin Uptown, who's been planning to be an animator since she was a tot.

Considering the date of the letter, the content is not that surprising. What surprises me, though, were the comments it solicited:

"Simply amazing;" "Scary;" "Unbelievable;" and "The world sure has changed, and I'd say for the better."
Whoa. That's a hell of a lot of self-congratulatory back slapping to digest all in one sitting.

I work in the creative arts, and there are lots and lots of women in my line of work. As a matter of fact, I work in one of the few fields in which there are just as many women as men in positions of all-consuming, soul-corrupting power.

That's part of the reason why, when I was offered this job, I told my friends I felt as though the mother ship were calling me home. After spending so many years during which all my bosses and most of my coworkers were men, it was a real thrill to imagine myself working alongside other women--women just like me--day in and day out.

But then the other day I heard a statistic that stopped me dead. Someone tried to tell me that women today make roughly 75% the salary as men employed in the same position. That statistic had to be wrong, I said, because it was the very same percentage I quoted in a sociology paper I wrote in undergraduate school in the early 90s.

So I looked it up and you know what? The statistic is correct.

Do you think that the fact that more women leave the workforce today after having children may be one of the reasons for the wage statistic? I too am trying to understand the wage gap, but there must be several contributors to the issue as gender discrimination to that degree would be too obvious not to act upon. Unfortunately, if it is simply discrimination, then the supreme court's ruling of two weeks ago scares me even more. In that case, the court held that a woman, who had been discriminated against for years in wages, could not bring a suit now because the actions which would be the foundation of the suit (i.e. the initial wages of the 90's) were outside the timeframe for which she could sue. The opinion scared me when I read it and now perhaps it will make me even more nervous. However, I am just trying to figure out what are the different reasons for the gap. It just seems too easy to blame discrimination.

Nope--I'm not buying it. No way do I believe women leaving the workforce to have or care for children is a contributing reason for the wage gap. (And no, I'm not that insightful; the research bears me out.)

BUT--I do believe that it is a convenient (and time-honored) way to assign the blame for the gap to the women themselves (we love this trick).

Women are their own worst enemy. So many of us follow like sheep. This February I was at the state capital trying to convince our legislators to ratify the ERA once and for all. Women were there arguing against it. Because why! Because the ERA promotes abortion, because it may result in unisex bathrooms, because it may force women to go to war. Who puts these whacko ideas in their head? The members of the gender that earns 25% more than we do?

In 1923, Alice Paul and other independent thinking women worked, fought, were imprisoned, even went so far as to go on a hunger strike to get congress to approve these words.
"Section 1. Equality of rights under the law shall not be denied or abridged by the United States or by any state on account of sex.
Section 2. The Congress shall have the power to enforce, by appropriate legislation, the provisions of this article.
Section 3. This amendment shall take effect two years after the date of ratification."

Here we are almost 85 years later, and as a nation have not guaranteed half of our population equal rights. It just makes me sad.
HML

Wait, before Tawana takes my woman’s ID card from me, let me flesh out my above statement re leaving the work force. I just read recently that today more women leave the work force for a significant amount of time (to be read 5 plus years), then they have in the past. Now why they leave and not the fathers and why they leave for that length of time is beyond me, I am just relaying what I read. So to me if a woman who is a manager leaves her position and then does not come back to the work place for five or more years – her male counterparts who have been receiving promotions and raises due to productivity and seniority are clearly going to be making more and will continue to do so for quite a while. What would be interesting is to compare the salaries and benefits of women to men who have not left the work force for a significant amount of time. Do women, who have remained in the workforce keep up with or surpass their male counterparts, now that would be an interesting study.