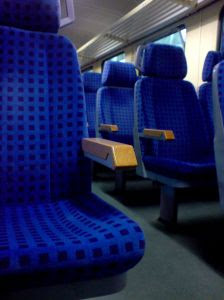 As it turns out, the train I took to Chicago yesterday has a history of running late. I believe, however, that they may have broken a record on this particular run, arriving at our destination over 4 hours later than scheduled.

I am happy to report that arriving boned tired, four hours later than planned, and smelling like a laundry hamper is preferable (to me) to the days of fear and dread that would have preceded another plane trip.

I do have stories to tell--as soon as I've had a couple hours to recuperate.