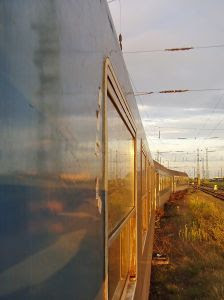 As I mentioned earlier, the Texas Eagle on which I was riding achieved a personal best by pulling into Chicago's Union Station a mere 4 hours later than scheduled.
I have friends who have taken this same train to Chicago many times. And to be fair, they all advised me to be prepared to wait--at the station, on the tracks, on the tracks, and on the tracks. I slept through a great deal of the waiting, so I wasn't aware how late we were until I noticed that we just didn't appear to be nearing Chicago. At all.
Apparently, the body's natural response to such extended rail time mirrors the SciFi suspended animation used to travel light-years between planets. The man across the aisle from me either slept, slack jawed in his seat for 14 hours straight, or he was dead. I hope someone from Amtrak checked on him; I myself was too drowsy to investigate.
At the CHA show, I flat-out refused to tell a co-worker how many hours I had spent getting there on the train; it was plain to see that she had her mouth all set to make fun of me. And it's true--I spent a lot of time this week looking out the window at a part of the country I have absolutely zero curiosity about (more on that later), but I didn't have to pharmaceutically lobotomize myself to do it. Once I finally did arrive, I barely noticed the planes buzzing the hotel as they swooped in to land; this time last year, I was working myself into a frazzle with the sound of every jet engine.
And even my fearless flyer friends gotta know, there are worse things than being forced to sit and read for hours. And nap. For hours.