Quick, Scottie--how many dilithium crystals will you have to burn to beam us up out of here? 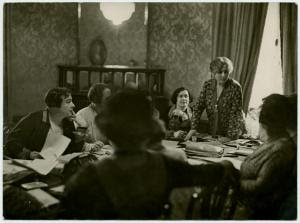 Although we didn't initially meet on the job, for many years my friend Tawana and I worked for the same organization. We were small but very important cogs in a highly complicated machine.

Since then, we've both gone on to bigger and better things--although her things are a little bigger and a little better than mine. She flies on the company jet; she keeps two households; she gets a mondo big yearly bonus. (Although I do get a fat and particularly juicy turkey at Thanksgiving and all the crochet instruction books I can eat.)
Surprisingly, there's no competition between us--instead, we bounce ideas off one another and contribute possible solutions to the other's professional dilemmas. I think I can even make a case for my advice being more helpful than hers--considering how successful my advice has made her. I wouldn't want her to know that I said so, but I sometimes believe that were it not for me and my occasional advice, Tawana would still be advising students to avoid Dr. Cunningham's class and take Atkins' instead; because the latter drinks and falls down and tends to cancel class a lot.

At any rate, after all these years, I pretty much know how she operates, and why she's as successful as she is.

Or so I thought.

Then last week she tells me, "Oh yeah. Whenever I have something I absolutely have to get wrapped up, I wait for 4pm on Friday to call the meeting. I call 'em in at 4, tell 'em what I need, and they agree to anything--I'm telling you, THEY'LL GIVE YOU THE WORLD just to get out of there."

Wow. All this time, I've had this image of Tawana, using her southern fried charm to make things happen all the way out there on the east coast. Instead, I discover that her business acumen is based almost entirely on the philosophy of hostage-negotiation.

And she may very well be the most hated woman in her entire company.

Which clears up a lot of things right there. So, yeah. If she worked for my company, I'd let her on the company jet. I'd give her the KEYS to the jet. As long as she was on it before 4pm on Friday afternoon.

And Cheryl--stop reading my mind.

I had to go back and remove the word ginormous from this post.

Which I probably appropriated from you anyway, so why did I bother?

You totally forgot to add to the blog that I'm only half an employee without you. Remember it was you that said, "You and I together make one good employee?"

In deed you are all the reason for any success I might be awarded.

See why I love her so?