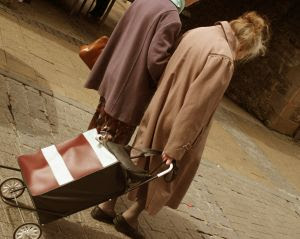 On Wednesday, I threw out a comment in a meeting and my boss stopped and asked me how long I had been sitting there thinking that one up.

Coming up with an answer took considerably longer than the comment that prompted the question. At least, it felt like I was just sitting there blinking at her for the longest time while I tried to process a response.

Part of the problem with answering her question was that I couldn't tell if the subtext was, "that was very funny, I'm impressed with your quick thinking," or "shut your piehole, we're trying to make money here." Most likely, she meant something completely different.

And that would be a fair question. Because I never know what the hell anybody is talking about. Ever. This, in spite of the fact that a great deal of the time, I know what they are going to say before they say it.

How can it be possible for me to know your response ahead of time, but fail to understand the meaning of said response once it is articulated? I have absolutely no idea. But I knew this was a question you were formulating as you read the previous paragraph. See how scary that is? And that's why I so often have that goofy, vacant look on my face as I listen to you. It looks like I'm mentally compiling my shopping list, but I am actually trying to translate the words coming out of your mouth into something that has something to do with me.

Other times, I will answer a yes or no question before it has been completely asked. Some people who know me are very impressed by this; others just think that it's a good trick that works 50% of the time. In reality, I really do know what people are going to say, but because they are obstinate, they don't say what they know I know they were going to say.

I don't know why some people have to be so difficult.