Saturday in the dressing room; not everyone was so lucky. 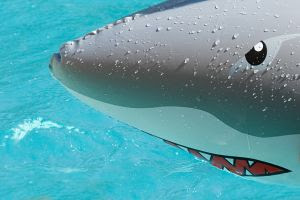 It's a scene from a disaster movie--a half dozen people dangle by the tips of their mangled, frozen fingers from the tilting edge of the sinking ship. A hundred-foot drop below are ravenous, cold-eyed sharks, circling, patiently waiting. They circle and they wait because they know. Someone will loose their grip; someone will fall. And when they do, we won't be able to avert our eyes. We will not be able to turn away, no matter how awful the sight.

Then the inevitable happens. And even if you look away, you can still hear flesh being ripped from the bone, the agony-ridden howls of the poor unfortunate soul who just can't hang on any longer. The poor woman doesn't even ask for help, because she knows that no one--no one can help her.

The shark has blue-tipped hair, a stud in her upper lip, and a flying monkey tattooed on her left shoulder. Our hapless victim looks like you and me and everybody's mom everywhere. This is a woman whose Karma has gone missing, whose star is in the wrong house, who really pissed off a Djinn in a past life. This woman is about to be killed and eaten by her child, and there's nothing anyone can do about it.

I could offer advice or some reassurance that someday she, too will enjoy a lovely afternoon shopping with her daughter, but I just don't have it in me. Who's to say she would believe me, anyway.

My grown-up, newly reasonable Muffin Uptown can't stop watching this unfolding disaster. There's an "ah-ha" look on her face, an I-get-what's-going-on-here look. With all due respect to the poor woman who is being sacrificed to make it happen, this look on my daughter's face is the cherry on top of a perfect day.

We hurry out of the dressing room and into the car.

"Wow," she says, and I look at her with what I hope is a wry expression. I'm not saying anything; I don't want to get in the way of what is sure to be one of the most rewarding things my child has ever said to me.

"That woman was just too much!" she finally says. "I really feel bad for the poor kid. I wish I could have found a way to tell her to hang in there--that her mom won't always be so awful."