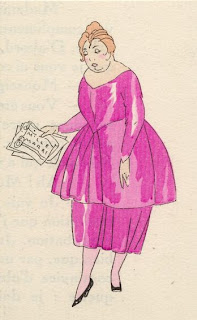 I've shaved my social circle (whether by accident or design) down almost exclusively to women. Most of the people I work with are women. It's a card-carrying NOW member's nirvana--living and working in a village populated almost entirely of women.

Or so you would think.

But it's a very dissatisfied village. Every day, I hear someone who is unhappy with her appearance. Too fat. Too old. Too gray. Too jowly. Too wrinkled.

And it's perplexing. I had expected that because we are similarly equipped, we would think more or less along the same lines--that we should be sisters under the skin, if you will. After all, they've spent the same number of years getting used to the feel of their skin as have I. So why should it be that I know so many women who are so painfully unhappy, chaffed, and uncomfortable in that skin?

We all have essentially the same body as the one we had at 23. Oh, mine is certainly older and heavier--its pores are larger--but I would still be able to pick me out in a crowd. And it's not like I went to bed one night looking like Angelina and woke up the next morning looking like Angela (Lansbury); I've had plenty of time to get used to and make peace with my aging, sagging self. I and my body have negotiated a fairly easy truce--I won't complain about my legs' growing similarity in appearance to those of my paternal grandmother, and said legs will continue to transport me dependably from place to place. This seems to me to be a fairly reasonable trade.

Sometimes, when I catch a sideways glimpse at myself in the mirror, I see the girl who was there in 1983. More often these days, though, I see my mother. This observation is not insightful in any way because it happens eventually to everybody. It happened to my mom, and it will someday happen to Muffin Uptown. But I'm not going to complain about this growing resemblance--and not because mine is the best body in the world, or is even as good as it could possibly be. But it does belong to me. And I came to it by virtue of my mother, and her mother, and her mother's mother--people who loved me (or at least the idea of me).

And to tell you the truth, my 1983 body wasn't all that hot to begin with.

It may well be that if I am heavier and slower than I used to be, it's because I'm spending less time chasing after toddlers and more time sitting and reading good books. Or maybe I'm spending more long evenings lingering over delectable food, drink, and conversation. All of these are activities I had hoped and planned to enjoy to their fullest in these, my (gulp) middle years.

Despite my having used my body rather badly over the course of my life, it's still hanging in there. It's still making the long trek to and from the job every day, and while it doesn't rest as easy as it once did, the rest I do get is sweet and I'm thankful for it.

Which doesn't make me any better or worse that all the women I know who can't seem to make peace with their bodies--just a little less angst-filled.