You are a number YO. 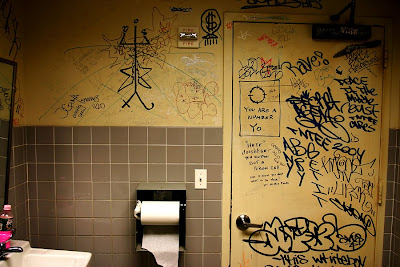 I needed to send a copy of my driver's license to someone. I don't even like showing my license to people who have the real-life me with which to compare--so I was really unhappy about having to send it out to be my sole representation to people who have never met me.  It didn't even matter that those people weren't going to care. I guess I'm just that vain.
But lo and behold, I had let my license expire.
So on Wednesday, I spent a goodly chunk of my only free afternoon awaiting my turn at the DMV, where I exchanged a license featuring the photograph of a wild-haired, myopic, middle-aged woman with two chins for one picturing a wild-haired, myopic, double-chinned doofus who is four years older than middle-aged.
You would have thought that being in possession of a particularly unflattering driver's license photograph for the last four years might have prompted me to practice in front of a mirror beforehand. It did not. Mainly because I just didn't believe it was possible to take a worse picture than the one I already had. Anything--I figured--would be an improvement.
I don't understand why the guy who was snapping pictures that day couldn't have leaned in and said, "Sister. You don't want to be making that particular face. I'm serious. Nothing personal, but from where I'm sitting, you look like a doofus."
DMV restroom Image,Chacabuco's photostream.

you should really scan it so we can be the judge

My last one wasn't too bad. BUT, I got it taken after I lost my previous one in my van. After I was pulled over by the cops near Hendrix. For nothing, really, except they thought maybe I had been drinking. Instead, I had been painting all day, and had promised my daughter an outing when we finished. Well, we finished late. Which obviously means that I was drinking. Whatever. My point is, I was so frustrated about the whole situation that I never even thought about the picture. Best one yet, except for the being fat part.

Having a good drivers license ID picture is an infuriatingly impossible task to accomplish...