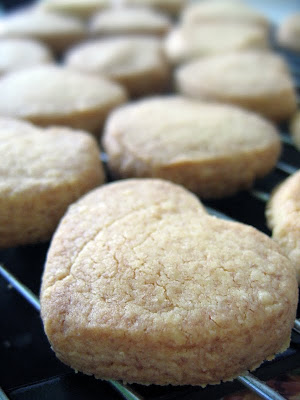 Monday night, after a not-very-productive or enjoyable day at work, I walked in the door at home and went straight to the computer. I hadn't accomplished much with my day, and the little bit I managed to do was, I felt, not very good.
Most people go home after a frustrating day and just try to get over it---a little How I Met Your Mother, maybe some pizza, probably some beer, and after a couple hours, they feel like they might be able to answer the charge again the next day.
I'm not so good at that. Usually, I'm re-living the battle, but trying to do it in such a way that it comes out differently. Sometimes this works just fine and I come out ahead. Mostly, though, I just come out tired.
That was the situation when Muffin Uptown came in and began making cookies in commemoration of having finished her last class. She brought first the cookie dough and later the first cookie for me to taste and approve. Which I did. Then she went about her business and left me to mine.

Then, about a half hour later, I heard her sitting in the living room, singing softly to the cat.

And every difficult thing about my day fell silently and completely away.

Originally posted December 12, 2007. Something tells me I'm going to want to remember this one.

Congratulations - you've won an award! Scoot on over to Not Telling to pick it up!