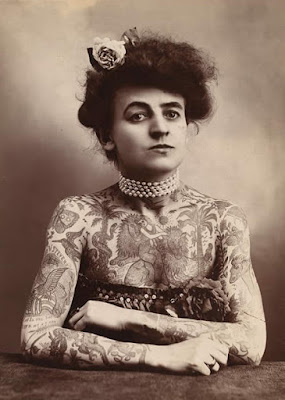 Until just the other day, when I thought about tattoos at all, I pretty much figured that people fell into one of two camps: those who had them and those who did not.

As it turns out, it's a little more complicated than that.

Times have changed. When I was a girl, had I brought home a boy with a tattoo, I would probably have forfeited my right to bring home any boy at all for a very long time. You can be sure that none of my girlfriends had tattoos (one of us was grounded for having gotten her ears pierced without permission). In my experience, only middle-aged men with military backgrounds sported tattoos.

But these days, practically everybody has something tattooed somewhere.

Enough people are tattooed now that--as far as I'm concerned--the stigma is gone. I am far less apt to condemn someone wearing a tattoo than I am to judge someone sporting a particularly foolish fashion choice.

People who have tattoos might encourage you to get a tattoo of your own. They might tell you that a tattoo is a form of self-expression, and that you should choose whether or not to tattoo based on your feelings and where you are in life. You should choose a tattoo design based on your personal taste; the most important person to please is yourself.

As it turns out, nothing invites ridicule so quickly among people with tattoos as do other people with lame tattoos. That tattoo may make you "out-there" as far as your friends and family are concerned, but it may also label you as doofus-y to the tattooed masses. In other words, even the people who defy social mores have social constructs.

It's a good thing tattoos weren't all the rage back in the early 70s. I'd be covered up like tapestry sofa. Not that I'm into pain or needles or even tattoos - it just might've been easier to rebel with body art than by dating boys who drove good-times vans.

I don't know. Bell-bottoms go out of style and boys with vans become bankers. A butterfly on your ass is forever, though.