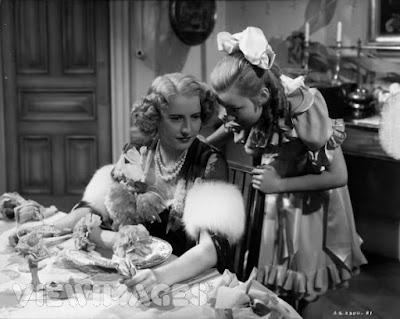 I've put together a list of my favorite mom-themed movies, just in case you aren't able to spend your day with the real thing. As you would expect, it's heavy on the heart-wrenchers.

Stella Dallas (1937) In one of her best performances, Barbara Stanwick plays Stella, a mom from the wrong side of the tracks who keeps getting it all wrong.

The Old Maid (1939) Single Bette Davis gives her daughter to Miriam Hopkins to raise, while she becomes the child's Aunt Charl0tte.

Mildred Pierce (1945) Poor Mildred can't do (or give up) enough for daughter Veda.

Carrie (1976) Piper Laurie is Hollywood's scariest mom. Sissy Spacek's Carrie is no bed of roses, either.

Terms of Endearment (1983) Shirley McClain and Debra Winger in a classic mother-daughter conflict. Another one for the tissues.

Freaky Friday (1976) Mom Barbara Harris and teen Jodie Foster trade places--and bodies. This one and the next are safe if you've already cried over your mom today.

Throw Mama from the Train (1987) In this twist on Hitchcock's Strangers on a Train, Billy Chrystal and Danny Devito strike a nasty bargain.

The Grifters (1990) Conman John Cusack is caught between mom Angelica Houston and girlfriend Annette Bening. Look this one up if you haven't seen it before. You may not cry, but you'll definitely rewind the climax to see it again.

Joy Luck Club (1993) Amy Tan's novel of four women, their histories, and their daughters. This one turns Muffin Uptown to mush. I generally start blubbering during the opening credits.

For those of us with more than one mother, I'd add "Stepmom."