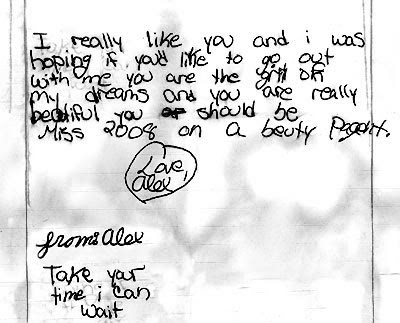 Do you remember that boy who liked you in the fifth grade? He was so cute.

Things were less complicated back then, and it was easy to see that he was into you because of the way he hipchecked you while you both stood in the cafeteria line. Yeah, you got into trouble for breaking out of line, but what ev.

At recess there was the playful snap of your tiny bra strap. When you left your desk to sharpen a pencil, you returned to find your homework gone. And then there was the Spy vs. Spy he drew on your notebook. He liked you. It was sweet. Until it wasn't. Right about the time you had had enough pranks and shoving, just when you were wishing he would try and hold your hand or otherwise show his tender side, he went too far. He called you out in front of his friends.

So yeah. All that attention? In the beginning, it was fun. But after a while, it was just tiresome.

First, there was One Friday, Without the Milk, Catherine Swinford's Amazon review for Tuscan Whole Milk. It is everything I love about the Internet--ironic social commentary combined with humor and corruption of the expected form. The idea of purchasing milk online was just too much to resist; 1060 others had a go.

But it didn't stop there. There are fake Amazon reviews for the JL421 Badonkadonk Landcruiser, Uranium Ore, and Fresh Whole Rabbit. Unfortunate clothing choices are under fire of late--the Three Wolf Moon T-Shirt, the Sea Cow T-Shirt, and Zubaz Pants are three of the most popular. The more ridiculous the item, the greater the number of fake reviews.

Unfortunately, not everyone is as creative as Ms. Swinford. If her approach to Tuscan Whole Milk, 1 Gallon, 128 fl oz represents everything I love about the Internet, then these last represent what I like the least: people who don't understand the difference between clever and mean.

Over-writing. That was the problem way back when with fifth-grade boys, too. Inaction and silence are skills that evolve into later patience and listening.

Remember the cool boys with the eyes in high school? Exactly.