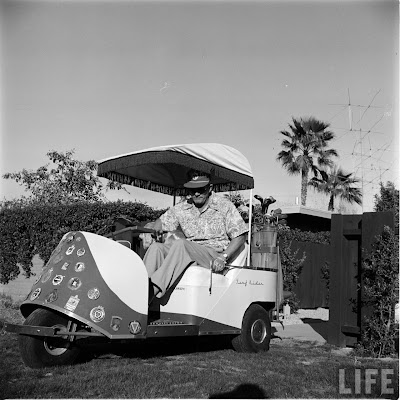 Last June, my mom bought a cap for my stepdad's pickup truck, gathered up both cats, a months' worth of red wine, lots of previously-neglected reading material, and drove 1022 miles to spend the summer back here in her home state.

Because, you know--this is where it's all happenin'.

She rented a house at Hot Springs Village, a gated retirement community full of golf courses and tennis courts and people who worked hard to be able to take it easy until they fall over. I agreed to spend a week there with her.

I arrived on Sunday. By Wednesday, it looked like we were well on our way to ripping apart the family dynasty.

Desperate to find something we could do together that wouldn't devolve into an all-out brawl, I suggested that we take a look at the local real estate. So we spent a couple afternoons seeing how the other half takes it easy--one large condo after the other--near the lake, on the lake, with attached decks overlooking the lake--some with boats docked literally, right at the back door.

I want to go on the record here to say that I never intended for anybody to buy anything. In fact, when I left, everything had pretty much gone according to plan--my mom got to oogle and disapprove of a bunch of other people's houses, and she and I were both still speaking to each other.

But just about the time I was sorting through the dirty laundry and wondering where in the world I had left my toothbrush, she called to say that she'd found a place she wanted to buy. In fact, she thought it would be an excellent idea for my brother and I to go in on the deal.

And that's how I came to be the accidental co-owner of an actual vacation property. Me. The girl who doesn't like going on vacation.

And now, thanks to having downsized my life, I no longer have a big house to improve, or a lot of boxes to unpack. Thanks to my new job, I can get away during Thanksgiving, Christmas, and Spring break, as well as during the summer months. And now that I own a vacation home, I don't even need extra money to do so. I have absolutely no excuse not to go on vacation. I am forced to acknowledge that if I can't master this thing when I'm the one in charge, then there's something wrong with me.

And so, as I write this, I am sitting squarely in the bosom of the geriatric center of the mid south--a place that contains--pound for pound--more grandmas, grandpas, chihuahuas, and golf carts than you would have thought possible.