The phrase that strikes fear into the hearts of my friends. 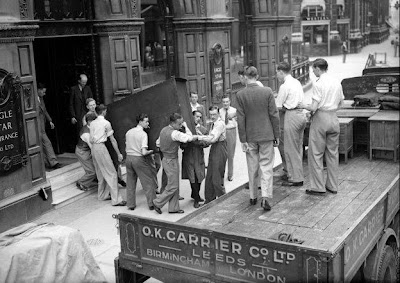 It's been not quite two years since my last relocation, and the kind souls who helped me the last time still haven't fully recovered. Until they see this, they won't even know that I'm packing.

But packing I must be, since I've already signed the lease.

If you could find Tawana to ask her, she would tell you that I'm just never satisfied, and there's a certain truth in that. We moved around a lot when I was a kid, and as an adult, I get tired of the same four walls after a while. And even though I've compiled a long laundry list of things I don't like about my current digs, this move has nothing to do with the floor plan or its proximity to the train tracks.

This time, I'm moving to a smaller apartment to match my smaller salary. It's the smart thing to do, so it doesn't hurt matters that I was pretty much ready for a change, anyway.

And since I'm off work until mid January with no students to torment, I'm going to need something to keep me from trolling the internets all day. I can't nap the entire time.

Well...if you're moving to a smaller place your stuff must be condensing, too. That should make your all woman moving crew a little happier?!

Maybe. If I remember correctly, Tawana's main gripe was that I owned too many pairs of black slacks (as opposed to too many black permanent press anvils).

Oh no! Maybe you can set up an orthopedist visit for the day after.