Just another (justifiable) reason to buy another pair. 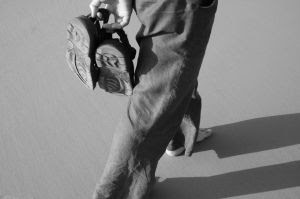 When it comes to social interaction, we have our own way of doing things down here in the South. We smile and make eye contact on the street, say "please" and "thank you" to perfect strangers, and may even go so far as to pretend that we don't notice how rude and inconsiderate the other guy is behaving.

We may not agree with you--we may not even like you very much--but we'll be on our very best behavior. It's all based on not making the other person in the least bit uncomfortable--even if we happen to think the other person is a dick.
This mode of behavior works for us. And it's so deeply ingrained, that I doubt most could change, even if we wanted to.

But then yesterday I read a news story describing how an Iraqi journalist took umbrage at something our always well-spoken president said during a news conference in Baghdad. Apparently, the guy chunked a shoe* at the head of the sitting President of the United States. When that shoe missed the mark, he immediately followed with the other one.

Neither shoe hit home; as it turns out, our president is fairly quick at dodging footwear. So quick, in fact, that I suspect these were not the only shoes he has had occasion to duck. Actually, this looks to me like exactly the kind of thing that might come of being married to a man like George Bush. Certainly, I could find it in my heart to forgive Laura Bush the occasional urge to lob a kitten heel at the noggin of her (surely) frequently infuriating husband.

Which all has me thinking that--Southern charm aside--I could really get behind this particular method of demonstrating my dissatisfaction--at that snooty grocery checker at Kroger or that girl on her cell phone during the movie--even that kid who keeps dragging into my 8 o'clock class at twenty minutes after the hour.

informative and entertaining. That's what I like about you!