A book review. Because my audience demands it. 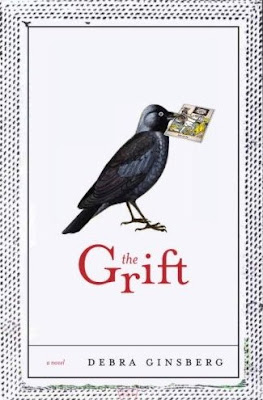 I got a lot of grief yesterday for not ponying up the title of the book I was so happy to have found. Sheesh. I was gonna, but I wanted to do it on my own timetable.

Well, this is it, so lay off, whydoncha?

I initially picked up Debra Ginsberg's The Grift because of the clever wordplay on the cover. As soon as I saw it, I was convinced that Ginsberg must have had the title first, before she had written a word. Better that way, I guess, than to have written the perfect book and then get all jammed up on the title.

From the book's intro:

grift - n. a group of methods used for obtaining money falsely through the use of swindles, frauds, etc.

Marina's been on the grift since childhood, conning others into believing she has the second sight. And it's true--she's pretty observant, and is able to pick up on all sorts of things the average observer lets fall unnoticed. It's not a bad way to make a living, I guess, provided you don't mind telling others only what they want to hear. But just about the time Marina has worked out all the kinks to her act, her real psychic abilities kick in, somebody gets killed, and the cops start thinking that all the cards point to Marina. Somebody's got to figure out who-done-it, and you don't have to be a mind-reader to figure out who that somebody is going to be.
I love books and movies about psychics. This may be because I come from a long line of women who think they can tell portents. My grandmother was convinced that her dreams sometimes came true, and even my mother tells of dreaming about her grandfather on the night he died. The apple, they say, doesn't fall far from the tree, and so it should come as no surprise that I can tell the future too. The problem is, I'm too dense to pick up on it until after all the smoke has cleared. It's hard to get credit for telling the future if all you have to offer is, "I knew that was going to happen."
But that's okay. I've got lots of stories to back me up. The thing is, I'm not telling them until I'm ready.

I knew you were going to write this—really.

You convinced me. I just bought it for my Kindle. That one-click to purchase thing on Amazon is just way too easy!
HL